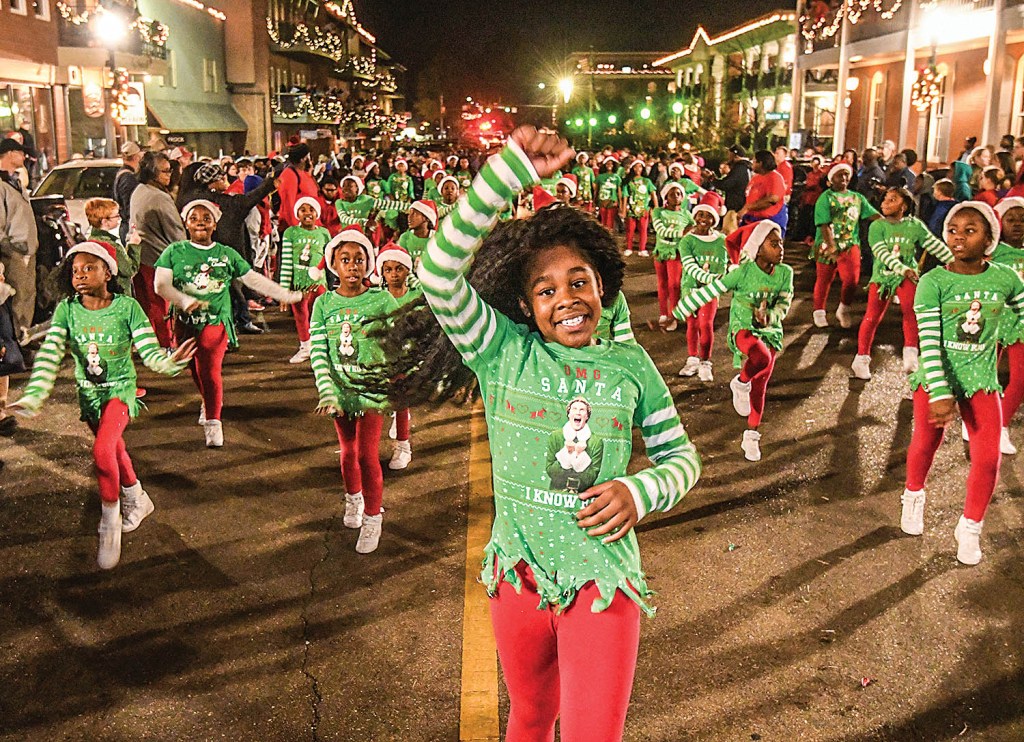 The annual Oxford Christmas Parade brought a little holiday magic and a large crowd to the Square last night.

The Lion’s Club presented the event, and its Grand Marshall was Oxonian and Olympian Sam Kendricks. The parade was filled with local charm, and included a variety of marching bands, local businesses and civic organizations.

One longtime participant is Debbie Payne. Her studio, Deborah Kaye’s School of Dance, has participated in the parade for the past 30 years.

“The girls look forward to it every year, even our high school seniors,” Payne said. “It’s a good opportunity to perform for their friends and community. This parade has that small town flavor, but so many people are involved.”

In addition to dancers, live music was also a staple of this year’s parade. The Orchard Church featured a karaoke-themed float, complete with two vocalists and a three-piece band. They also had televisions mounted on the sides of the float so parade attendees could sing along.

One of the most lively acts was local group Oxford All-Stars Band, a nine-piece ensemble who joined the Boys and Girls Club for a float filled with Christmas and R&B classics. The Oxford All-Stars are relative newcomers to the parade scene, said Michael Logan, the band’s drummer.

“We got together around four years ago, and we’re all musicians from Oxford,” Logan said. “Tonight, we played some Christmas classics, a little ‘Merry Christmas Baby,’ some “This Christmas,” as well as the stuff we do at our shows.”

“I’ve taken my kids every year for the past 10 years,” Maiden said. “We love the marching bands and Santa of course.”

Four-legged friends also made special appearances at the parade. Oxford City Market’s float featured farm animals, including a goat. Canine companions from Paws Animal Hospital were in attendance, as well as therapy dogs from Wildrose Kennels.

Wildrose Kennels’ float featured duck hunting and kayaking scenes, as well as a team of British Labradors, all trained at the facility.

“Our float theme is ‘A Dog Prepared to go Anywhere,” Danielle Drewery, dog trainer, said. “It’s our second year in the parade, and we’re looking forward to showing people that there are so many things to do with your dog.”

Each year, prizes are awarded to the Top 5 floats. Out of all the wonderful entries, this year’s winners are: Stubblefield Dental Clinic, Servpro and North Mississippi Regional Center.