Lafayette girls rally as the Commodores split with South Panola 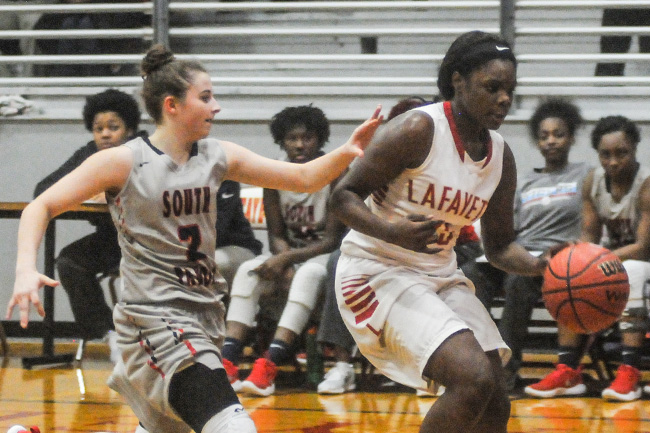 They were in this same position three weeks ago.

After building up a large lead over South Panola the Lafayette High girl’s basketball team allowed the Lady Tigers to get back into the game.
Three weeks later the results were the same, nearly to the point.

“We were in the locker room and I tell the girls this is where we were the last time we played them,” Lafayette head coach Shayne Linzy said. “We built and I said, ‘we start hurting ourselves.’ …it was us. Our unforced errors.”

It was smooth sailing for Lafayette after the opening eight minutes, building a 15-2 lead over South Panola (2-6). But an even second quarter kept the Tigers within striking distance, trailing 31-18 at halftime.

Sloppy play by Lafayette in the third quarter allowed South Panola to come back. The Commodores had 31 turnovers and the Tigers used them to their advantage in the second half.

The championship experience of Lafayette came into play in the final minutes, using a 10-1 run to slow down South Panola and come away with the comeback win.

“Some defensive lapses that we didn’t have in the first half but all of a sudden we have in the second half,” Linzy said. “We got down four-five points and we came back. It’s great to win those games but when you’re up 13 at halftime you’re supposed to put the pedal to the metal and you’re supposed to finish them off. We didn’t do it.”

Unlike last time the two teams squared off in Batesville, Lafayette was without their key player on Tuesday.

Sophomore point guard Azariah Buford injured her knee last week against Houston. She has been out since. It was the opposite knee Buford injured last season and MRI results came back negative.

Not having the reigning EAGLE Player of the Year on the floor has been noticeable at times but Linzy’s players have stepped up.

“I just got finished telling Kimaya, ‘your game is going to be so much better when Azariah gets back,” Linzy said. “Kimaya is doing just fine. D’Erica Booker is helping us out. I got my eighth-grader in (Karizma Norphlet) the first half and she’s looking pretty great. …For the most part they did will. At times we got sloppy and out of control.”

Linzy plans to keep Buford out through the rest of this week, which includes games against Kirk Academy on Thursday at the East Webster Tournament and a highly anticipated matchup at Ingomar on Friday.

The last time Lafayette and Ingomar played it was a thrilling four overtime game that saw the Commodores come away with the 67-60 win.

“There’s no reason to get (Buford) back out there until she is full 100 percent,” Linzy said. “It’s going to be a huge test (Friday). The trick is we got Kirk Academy on Thursday. …got two really, really good tests and I’m interested in seeing how our girls react.”

Boys stumble
There was not a comeback win for the Lafayette boy’s team on Tuesday.

The Tigers (2-2) pulled away in the second quarter but Lafayette (1-3) closed the gap to eight points midway through the third quarter and even outscored the Tigers in the fouth but the deficit was too great.

“We didn’t play well,” Lafayette head coach John Sherman said. “We’re just don’t seem to be in sync. We talked a lot about effort tonight before the game. We got some guys not contributing. If you’re a starter you got to contribute.”