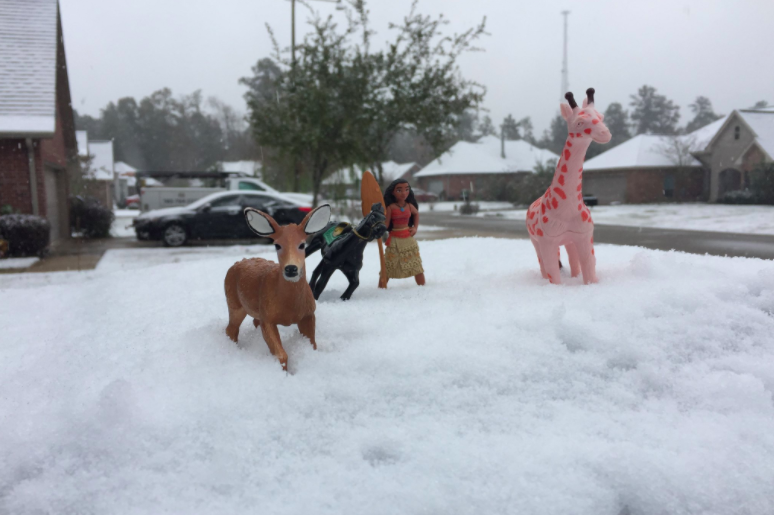 A surprise Missisippi snow on 12/8/17 dumped record amounts to some in central and south Mississippi. (twitter)

It was an epic day for snow in Central and South Mississippi.

Jackson, the state’s capital, received 4.9 inches — its biggest snowfall since 1982, according to the National Weather Service.

Elswwhere, parts of south Mississippi and southeast Louisiana have recorded one of their heaviest-ever snowfalls.

National Weather Service officials say 6 inches (15 centimeters) or more of snow has been recorded across southwest Mississippi. With 6 inches, Columbia recorded the most snow ever in one day and Meridian recorded its third-heaviest snowfall. Jackson at 5.1 inches (13 centimeters), recorded its sixth-heaviest ever snowfall.

At Belhaven University in Jackson, students built snowmen and engaged in running snowball fights in the school’s football stadium, blowing off steam during fall exams.

Mississippi cities that rarely get measurable snow including Vicksburg and Natchez were celebrating the surprise with two inches and more.

Utilities in Mississippi report nearly 80,000 customers without power, with outages concentrated around McComb and Hattiesburg. Brock Williamson, a spokesman for Taylorsville-based Southern Pine Electric Power Association, says snow is weighing down tree branches, which are falling onto power lines. He says officials aren’t sure how long it will take to restore power to more than 20,000 of the cooperative’s customers whose lights are out. Southern Pine and other cooperatives are seeking extra crews from other utilities to help.

A the snow ends, a hard freeze is predicted deep into South Louisiana and south Mississippi Friday night, prompting warnings that roadways will freeze over. Utilities are reporting 66,000 electrical outages statewide, down from an earlier peak of nearly 80,000.