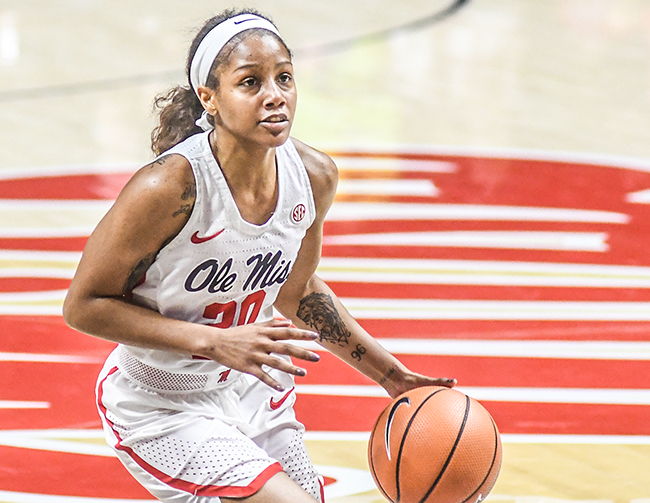 Ole Miss Madinah Muhammad (20) playing against Arkansas State on Saturday, December 2, 2017, leads Ole Miss in scoring with an average of 21.1 points per game.

Ole Miss has had hot starts before under Matt Insell.

Just last year they went 11-2 in non-conference play before a 6-10 record in the Southeastern Conference derailed what looked to be a promising season that ended with a first-round loss in the Women’s NIT to Grambling State at home.

This year the Rebels are off to another quick start at 7-1 with a top-50 RPI ranking and just this week received votes in the USA Today/WCBA Coaches’ Poll.

Eight games in, Insell is beginning to get a sense of what this year’s team’s potential is.

“I think I know what we can be,” Insell said. “We’re a long way from getting to where I want to get to. I feel very confident in our rotation right now.”

During Insell’s five seasons at Ole Miss, he has seen his squad take off in November and December only to falter in January when the SEC slate begins. During his media day press conference Insell spoke of being more at ease and at peace heading into this season. It’s a different approach than what he took entering his other four seasons.

That has helped when asked what makes him feel this is the year the Rebels can continue the momentum gained in the Fall and carry it into the winter months where it matters most.

“There’s a sense of want-to from this team,” Insell said. “They want to do really well. There’s a feel that they take everything serious no matter what drill we’re in at practice. They take coaching. They want coaching. They want to be told things. …that brings a sense of calmness to me. They’re still angst and anxiety about what happens here, what happens there, but I know we’re going to show up.”

The season is barely a month old but Ole Miss has already begun to build a strong NCAA Tournament resume. They are 2-0 against top-100 RPI opponents in the latest Warren Nolan rankings with wins over Troy (64) and Arkansas State (84).

Ole Miss concludes its current homestand with games against South Alabama on Saturday and an 11 a.m. tipoff against Southern Mississippi on Tuesday. The Jaguars (4-2) are sitting comfortably inside the top 100 at 70, giving the Rebels another chance to cushion their resume in trying to reach the NCAA Tournament for the first time since the 2006-07 season where they made the Elite Eight.

Their biggest non-conference opportunity of the season comes on Dec. 17 when they travel to Eugene and take on Oregon who has an RPI ranking of 23. It is the first of a two-game road trip to the Pacific Northwest that also includes a game at Portland State on Dec. 19.

“The approach we’ve taken with this bunch is just one game at a time,” Insell said. “We know there’s a tough stretch. We know South Alabama is pretty good. We know Southern Miss is going to come in here really good. We know that we got Portland State and Oregon on the horizon. We know what’s ahead of us but at the same time we’re only going to focus on this game and each second of this game.”