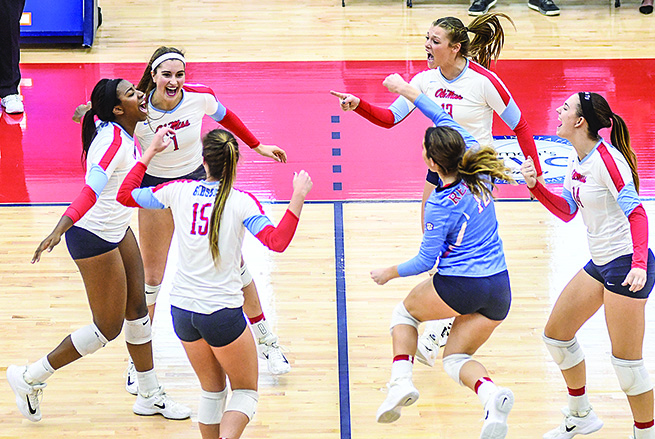 Steven McRoberts knew his team had a chance to put up some big numbers this season, but Ole Miss’ volleyball coach didn’t expect all of this.

Making their fourth postseason appearance ever and their first since 2010, the Rebels have already made their deepest postseason run with a semifinal appearance in the National Invitational Volleyball Championship. That’s where they’ll meet West Virginia on Saturday at 4:30 p.m. at the Gillom Center with a trip to the NIVC championship match on the line.

Ole Miss has rewritten the record book along the way.

In McRoberts’ fourth season at the helm, the Rebels have posted the most home wins in a single season in the 25-point era and enter Saturday’s match with a chance to still tie the record for the most overall wins. Ole Miss has also set single-season records for kills, blocks and digs.

“It’s been really fun this year to kind of see it all, especially late in the season kind of all come together,” said McRoberts, who’s led the program to four straight winning seasons for the first time in three decades.

The production has been spearheaded by senior outside hitters Kate Gibson and Lexi Thompson, each of whom recorded her 1,000th career dig and 1,000th career kill this season. They’re Ole Miss’ first members of the 1,000-1,000 club in the rally era and two of just eight members in program history.

“Being part of such an exclusive club is awesome and hopefully it just leaves a good legacy behind when I am gone for other people to want to reach it to,” Gibson said.

Gibson, who will end her career in the top 10 in school history in both categories after transferring from Memphis following her freshman season, has accumulated more than 400 digs and more than 400 kills this season. The SEC’s leader in double-doubles is one of just eight players nationally who can say that.

“It’s more than I could’ve dreamed of,” Gibson said.

Thompson is already the school’s all-time leader in kills, service aces and double-doubles and ranks third in digs. She also joins Gibson and sophomore Emily Stroup as players who’ve recorded at least 300 kills this season, making Ole Miss the only team in the SEC with three players who’ve accumulated that many.

“Obviously it’s a team sport, but it’s just cool to have one of the teams that has two people in the 400 (kills) and three people in the 300 (kills),” Thompson said. “We were very successful this year, but that proves you can’t be successful with just one person.”

Stroup has etched her name in the record books with 438 kills, breaking the single-season record set by Thompson just last season. McRoberts said there was a natural progression in strength and maturation for Stroup between her freshman and sophomore seasons, but growth in the mental part of the game also helped.

“For her, it’s an all-around game,” said McRoberts, who added Stroup is the hardest hitter on the team. “Definitely hitting it hard helps to get kills. She hits it at a high point. It doesn’t matter how hard you hit it if you hit it low. You’re going to get blocked. She’s done a nice job of using her intelligence on the court. Her IQ’s picking up. It’s been fun to see her overall game just really take shape.”

The Rebels would like to finish the season with a championship even if it’s not in the NCAA Tournament. Saturday’s winner will advance to face Texas Tech on Tuesday for that chance.

But regardless of how it ends, it’s one that will leave a lasting mark on the program.

“Just based off what we’ve done in the last three years, statistically this team was right there if not better in most categories, so I knew just from the amount of sets we were playing and the success that we were having that we had the potential to break a lot of records, which we have this year,” McRoberts said.

Ole Miss to get biggest opportunity, test yet at…