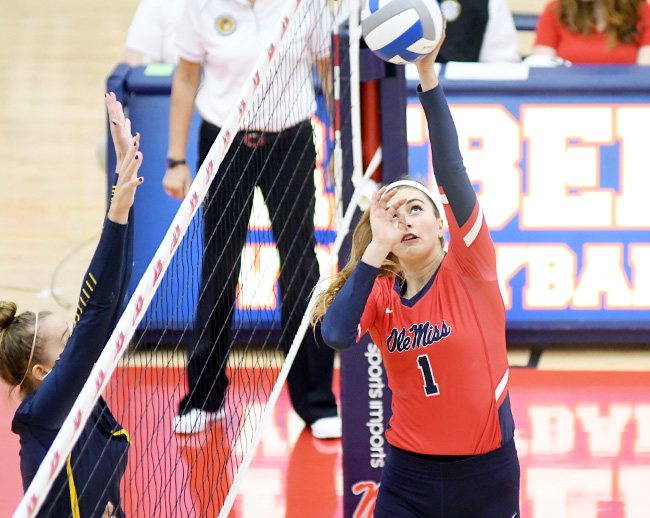 Ole Miss’ Lauren Bars tips the ball over the net to score a point against West Virginia in the National Invitational Volleyball Championship at the Gillom Athletics Performance Center, in Oxford, Miss. on Saturday, December 9, 2017.

Ole Miss marches on in the National Invitational Volleyball Championship.

The Ole Miss volleyball team defeated West Virginia 25-23, 25-22, 25-17 on Saturday afternoon at the Gillom Athletics Performance Center in Oxford to advance to the finals. The Rebels will host Texas Tech on Tuesday, December 12 at 6 p.m. Texas Tech defeated TCU 3-1 on Friday to reach the finals.

Ole Miss has only lost one set in its four games played in the tournament. The Rebels defeated Stephen F. Austin 3-0, Arkansas State 3-1, Georgia 3-0, before defeating West Virginia 3-0.

Ole Miss now leads the series against West Virginia 2-1. The Mountaineers won a 3-2 match at the Deacon Invitational in 1997 and then the Rebels claimed a 3-1 win at the Kansas Invitational in 2000.