Oxford splits with Independence as boys win in OT 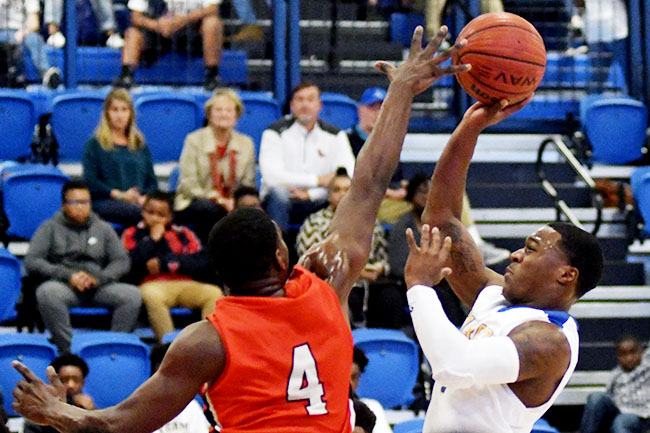 With students and teachers filling the stands of the Oxford High gym the Chargers hosted Independence for a pair of matinee games in their annual ‘School Day’ event.

Unlike their usual game times of 6 and 7:30 on Tuesdays and Fridays, Oxford played at 12:45 and 2 p.m. with the boys gutting out an overtime win to stay undefeated on the season.

“We’re just trying to put more energy around our student athletes and interest around them,” Oxford head coach Drew Tyler said of the event. “Letting them see the athletic side of them because during the day they got their laptops and their books out. I just think it builds school spirit and camaraderie.”

Behind 24 points from Drew Bianco, Oxford held off the Wildcats for a 62-59 win in overtime. It is their second overtime win of the young season and the Chargers (8-0) continue to find ways to win.

“We tip off during the school day and win the game late afternoon,” Tyler said. “Throughout the majority of the game I just felt like we were the reaction and Independence made plays. They made us step up.”

A team goal Oxford has added is to be undefeated at Christmas break. With Monday afternoon’s win and two more games left before the holidays, the Chargers are well on their way to achieving it.

After taking a 16-12 lead into the second quarter, Oxford cushioned that lead with 13 points to Independence’s five for the 29-17 halftime lead.

The lead shrank in the second half with Independence forcing the game into overtime. Bianco and Tucker Scott provided the offense in the extra time while Hiram Wadlington connected on three of four three throws in the final five seconds with the game tied 59-59 to pull out the win.

“We were caught out of position. Got into foul trouble,” Tyler said. “(Independence) got to the foul line early and I know we had the lead early but I think we got complacent. Complacency pushed the game into overtime. Fortunately, Wadlington went to the line and hit some free throws.”

The Oxford girls just completed a stretch of four games in five days.

Coming off three games in Poplar Bluff, Missouri last Thursday through Saturday the Lady Chargers turned around and played Independence with one days rest.

It has been a rough portion of the schedule and Oxford dropped their fifth game in a row after a 53-44 loss to the Lady Wildcats on Monday.

“We knew this was coming up,” Oxford head coach Cliff Ormon said of the schedule. “We kind of tried to talk about it being more of a mental game than a physical (one). We had to really push through it mentally. I thought we played well at times. I can start to see our inside game start to step up.”

Oxford closed the gap to within four points in the fourth quarter after trailing by as many as 10 points in the second half, but timely three-pointers from Independence snuffed out a would-be rally.

The record and results are not reflective of it but Ormon feels there positive progress being made and used Monday’s performance as an example.

“Tough season right now for our players,” Ormon said. “They don’t quit. We’re getting closer but we’ve got to get over the hump. Today was one of those days where I definitely saw some things we can definitely build on going forward. That’s what I’m looking for.”

Friday brings the Crosstown Classic to the hardwood with Oxford hosting Lafayette in the first of two meetings this season.