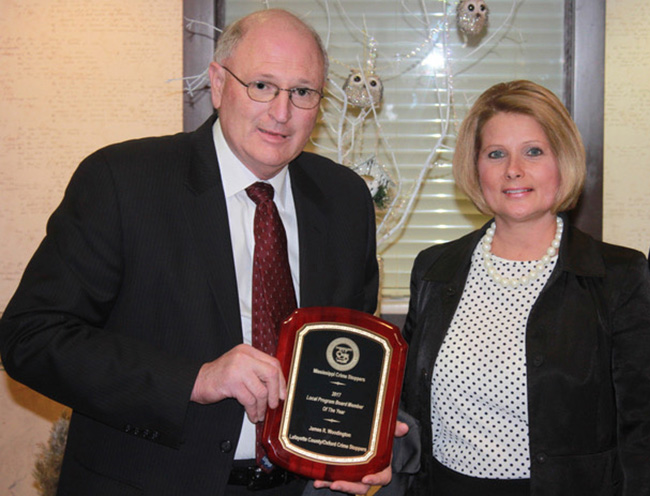 JOHN DAVIS James Woodington, left, is presented the Local Program Board Member of the Year by Mississippi Crimestoppers and executive director of Crimestoppers Trish Harbour.

For about 30 years, Jim Woodington has been helping to solve crimes in Oxford and Lafayette County.

However, he isn’t a detective or police officer. He’s a member of LOU Crime Stoppers that offers rewards to people who provide law enforcement with tips about local crimes.

Last week, Woodington was honored for his service by Mississippi Crime Stoppers when he was presented with the state award for Local Program Board Member of the Year.

Woodington, a vice president with FNB Oxford, has served as the club’s treasurer for more than 15 years. LOU Crime Stoppers chapter director Calvin Sellers and Leisa McElreath, with MS Crime Stoppers, surprised Woodington with the award in the lobby of FNB.

“I was very excited,” Woodington said Monday. “I know this award is a big deal. No one from our club has won it before, at least since I’ve been with the club since 1980 or so.”

The award was supposed to be given to Woodington during MS Crime Stoppers’ annual banquet last month, but Woodington didn’t attend the conference.

“I thought since I lived here in Oxford, it would be nice to make the presentation to him as a surprise at the bank,” McElreath said.

McElreath said Woodington was nominated due to his length of service and for being “very honest and trustworthy.”

Crime Stoppers is funded by a $2 fee attached to local criminal citations. The funds are used to reward those who provide information about local crimes that lead to an arrest and conviction. However, Crime Stoppers also prevents local pawn shops from losing money when a thief pawns stolen merchandise.

“If someone steals something and sells it to a pawn shop and it’s found by police, those items are placed into evidence and then returned to their owners and the pawn shops are out that money,” Woodington said. “We reimburse the pawn shops the money they laid out.”

Woodington was invited to join by former Crime Stopper member David Knight 30 years ago; however, back then it was almost like being in a secret club.

“Members weren’t allowed to tell people they were on the Crime Stoppers board in fear the criminals would take revenge on them or their families,” Woodington said. “Over the years, those regulations loosened up.”

Woodington said he has remained a part of Crime Stoppers for so long because he likes knowing he’s doing his part to keep Oxford and Lafayette County safe.

“The more criminals we can keep off the streets, the better it is for all of us,” he said.