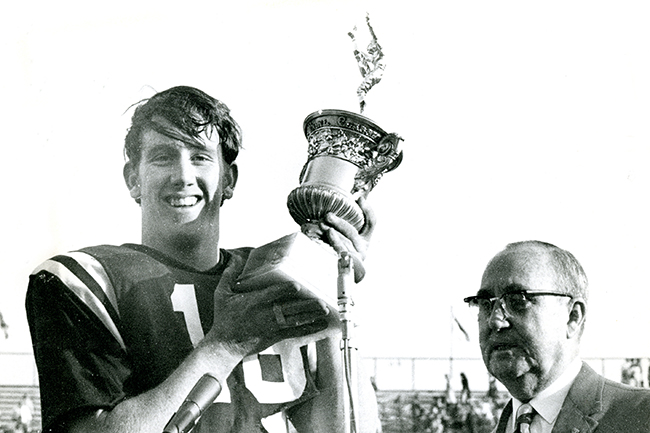 The Allstate Sugar Bowl will welcome 16 legends into its inaugural HOF at the annual New Orleans football classic. The first class of Hall of Famers spans seven decades of Sugar Bowl action and includes 12 all-star players, two national championship coaches and two individuals who had the rare distinction of both playing and coaching in the Bowl.

Arguably the greatest all-around performance in Sugar Bowl history was turned in by Brown in the 1958 Sugar Bowl. The Ole Miss senior rushed for an early touchdown, passed for a second-quarter score and recorded a Sugar Bowl-record three interceptions on defense. However, his most memorable moment came as the clock wound down. Dropping back to punt from deep in his own end zone, Brown found himself under heavy pressure; he bolted to the right and then steamed down the sideline 103 yards for a touchdown – the play was officially 92 yards, still the longest in Sugar Bowl history.

Manning passed for 273 yards and a touchdown while also running for another score in a 27-22 Sugar Bowl victory over Arkansas in 1970. Manning would return to the Crescent City in 1971 after being drafted by the New Orleans Saints and would become one of the most beloved athletes in the city’s history. He was elected to the Sugar Bowl Committee in 1986 and remains a vital part of the organization today.

The New Orleans Mid-Winter Sports Association was founded in 1934 by a group of civic-minded businessman and professionals interested in promoting amateur athletic events geared toward bringing visitors to New Orleans during what had traditionally been a slow period for tourism. Now known as the Sugar Bowl Committee, the organization remains a voluntary group whose members serve without remuneration. A full-time staff is retained to assist the Committee in managing its affairs and is headed by CEO Paul Hoolahan and COO Jeff Hundley, who have over 40 years of combined experience running postseason college football games.

“The Sugar Bowl has had the opportunity to host many of the greatest coaches and players in college football history,” said Stanley Cohn, the President of the Sugar Bowl Committee. “We wanted to have a way to recognize the best-of-the-best in our history – what better way to do that than to create a Hall of Fame?

“We believe we have an inaugural class which should go down as one of the most accomplished groups of inductees into any Hall of Fame,” Cohn continued. “But let me tell you, it was very challenging to limit it to 16. There have been so many legends in our game, our future classes figure to be just as impressive as this one.”

The living members of the inaugural class of the Sugar Bowl Hall of Fame have all been invited to New Orleans for this year’s Playoff Semifinal at the Allstate Sugar Bowl. Attendees and their guests will participate in select Sugar Bowl VIP activities and will be recognized on the field during the pregame ceremony leading up to the big Clemson vs. Alabama showdown.

Oxford splits with Independence as boys win in OT