National Guard is asking for support from Oxford businesses during deployment 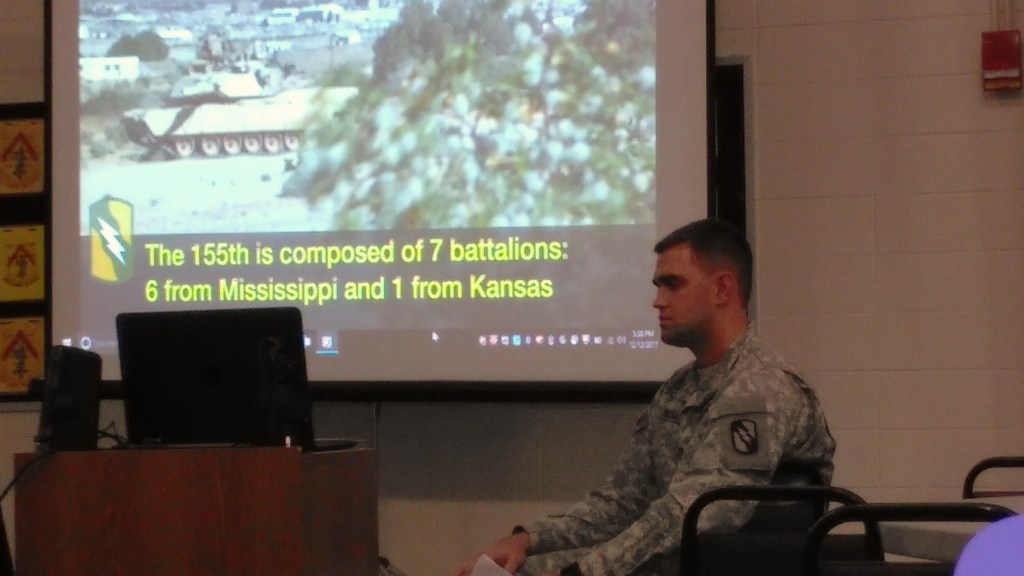 Cpt. Gerald McCarty shows a video Tuesday at the National Guard Armory about the upcoming deployment overseas during a community briefing on ways people can support the troops.

According to local members of the Mississippi National Guard, the best ways to support soldiers from Oxford and surrounding areas during their upcoming deployment overseas is to write letters of support while they’re there and if you own a business, extend a helping hand to their spouses.

On Tuesday evening, Cpt. Gerald McCarty with the Oxford’s Alpha Company 2-198 Armored Regiment and Lt. Col. Chris Cooksey, the 155th Armored Brigade Combat Team operations officer, spoke to a group gathered at the Armory for a briefing to let the community know more about the deployment and ways they can support the troops.

McCarty said the community can help by sharing factual information when the troops begin heading out of Oxford.

“When we deploy, it will be noticed,” he said.

The National Guard Armory in Oxford, next to the Oxford Conference Center, will not be operating full-time. The upkeep and maintenance of the armory will fall to Senatobia and those soldiers who did not deploy and the armory will often appear empty. However, McCarty said after the deployment, things will return to normal at the Oxford armory.

“We’re not leaving Oxford,” he said. “We’re committed to Oxford and will have a presence here for a long time.”

In the spring, thousands of soldiers with the 155th Armored Brigade Combat Team, including Oxford’s Alpha Company 2-198 Armored Regiment, will deploy overseas for nine months in support of Operation Spartan Shield.

Sometime in March, soldiers from Oxford and around north Mississippi will join other Mississippi National Guard soldiers in Fort Bliss, Texas for training before being deployed to the Central Command Theater based out of Kuwait.

McCarty and Cooksey said they will be compiling a list of local business – from electricians to car mechanics to plumbers – to provide to the soldier’s spouses during deployment.

“We’ll have means of communication where we are, but we can’t just leave the job and come home when the car breaks down or a pipe bursts in the house,” McCarty said. “It would be great to have a list that we can give to our spouses and families, so when they do have a problem, they know who to call and those businesses are aware of our situation.”

McCarty said the businesses would receive a list of soldiers being deployed so when a spouse or family member comes in, they can be verified as such.

Jon Maynard, CEO and president of the Oxford-Lafayette County Chamber of Commerce attended the meeting and told McCarty and Cooksey that the chamber would be happy to help compile a list of chamber members and help the Alpha Company to contact those businesses.

“We are your team to be able to do that,” Maynard said, who added the chamber would also help organize care package and letters of support drives.

Cooksey said the soldiers will start training at Camp Shelby around February and then will be back in north Mississippi for one or two weeks before they’re sent to Fort Bliss for more training.

“Sometime in mid-summer, we’ll start moving out,” he said.

Operation Spartan Shield is U.S. Central Command’s means to deter regional aggression and stabilize countries within the region. This will be the third deployment for the Alpha Company since 2001.