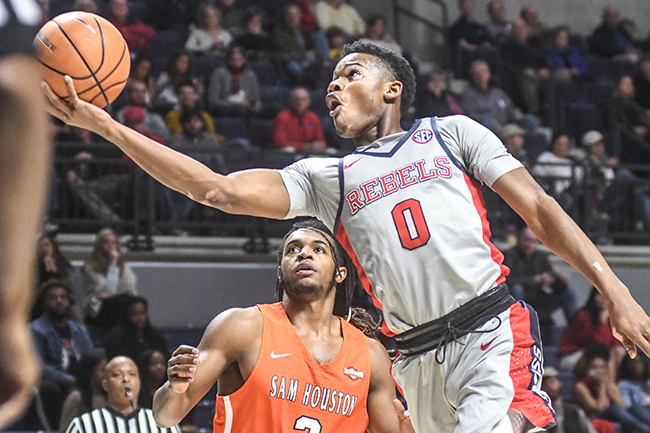 After a winless stretch against top-100 RPI teams, Ole Miss returned home Wednesday trying to avoid disaster. Despite some of the same issues popping up, the Rebels did what they needed to do.

Ole Miss used a balanced scoring effort to hold off Sam Houston State for an 82-69 win at The Pavilion. The win ended a three-game losing streak for the Rebels, who led by as many as 20 in the second half.

Markel Crawford paced Ole Miss with 16 points, 14 of those coming in the first half. Devontae Shuler and Bruce Stevens had 14 and 13 points, respectively, while Deandre Burnett added 12 points and six assists to help the Rebels (5-4) avoid a bad loss against the Bearkats (5-5), who came in with an RPI of 217, on a night when leading scorer Terence Davis had just five points, a season-low.

Chris Galbreath Jr. led three Sam Houston State players in double figures with a game-high 22 points while Cameron Delaney and John Dewey III added 12 points apiece for the Bearkats, who got within 10 on Jamal Williams’ layup with 2:07 left. Sam Houston State didn’t get any closer after missing its final five shots, though it was too relaxed of a finish for Kennedy’s liking from a team that’s consistently struggled to put teams away in its wins and make winning plays in crunch time in its losses.

“We’re not playing with a sense of urgency,” Kennedy said. “It’s the same thing I’ve been telling you guys. If I’m telling you, do you think I’m expressing it to them? That would be a good bet. They’re hearing it every single day.”

Davis didn’t score until nearly four minutes into the second half, but Crawford helped the Rebels pick up the slack early. Ole Miss led by as many as 19 in the first half with Crawford making five of his first six shots, including a 4-for-5 start from 3-point range, on his way to 14 points in the first 14 minutes.

“Just being in the right spot and being down and ready to catch and shoot,” said Crawford, who doubled the number of 3s he’d hit in any game this season. “I think those previous shots I took the first eight games, I wasn’t down and ready to shoot. I think now my confidence is up. I’ve seen a couple go in, so that should be good for me.”

Sam Houston State scored the next 10 points and ended the half on a 17-4 run to trim Ole Miss’ lead to 39-33 at halftime. But the Rebels stretched the lead back to double digits within the first five minutes of the second half and kept their distance to notch their first win since Nov. 22.

“The biggest thing was trying to get a W in that win column,” Crawford said.

In his second straight start in place of Dominik Olejniczak at center, the 6-foot-8 Stevens had his way against the smaller Bearkats on the interior, making six of his seven shots. Stevens combined with Olejniczak and forwards Marcanvis Hymon and Justas Furmanavicius to shoot nearly 78 percent from the floor (14 of 18) as Ole Miss outscored Sam Houston State 40-24 in the paint and finished plus-13 on the boards.

“Offensively at the block, I think what (Stevens) does translates,” Kennedy said. “We’re trying to establish a low-post presence, and he’s our best option.”

It helped Ole Miss shoot 51.7 percent for the game, including 63 percent in the second half. Sam Houston State shot 40 percent from the field.

Ole Miss will stay at The Pavilion on Saturday against Illinois State. Tip is set for 2:30 p.m.