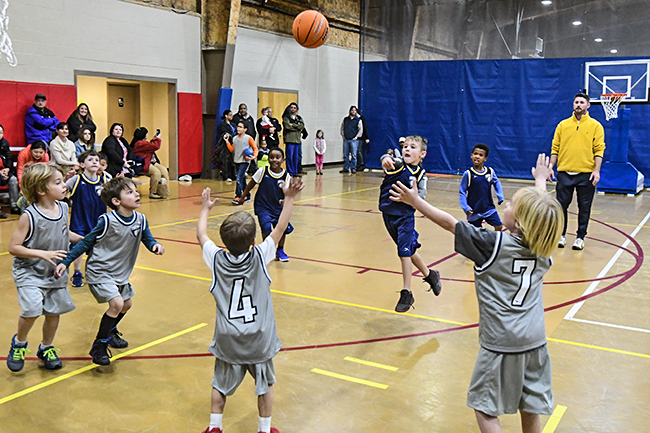 Participants in the Oxford Park Commission's basketball program play at the Oxford Activity Center in Oxford, Miss. on Tuesday, December 12, 2017.

Oxford’s population is growing, and the city’s recreation programs are feeling the effects.

Over 575 children are involved in the Oxford Park Commissions basketball program alone, plus 59 more on the waiting list. There are 59 teams in the league and 236 games to play in a seven-week season.

Due to space issues and an aversion to Saturday games, Executive Director Seth Gaines is left to figure out a way to play at least eight games per day, four days a week. Gaines admits that what they’re doing is not ideal, but it is the best solution at the moment.

“In the past two years, we played five days a week, so we’ve had to change some court sizes this year,” Gaines said. “We’ve had some people who aren’t happy about that, and I get it.”

Reducing court sizes makes games more cramped, but it does allow the league to complete their season within the time allotted.

The new Oxford Activity Center is expected to alleviate the space and scheduling issues, adding additional junior-size and standard courts, as well as more classrooms and multipurpose spaces.

“I really believe when we get that new facility, we could cut down to playing three days a week,” he said. “The intent, once it’s built, is that we will be playing ball on all courts.”

The new activity center is also expected to allow enough room for OPC to add an adult basketball program, as well. John Davis, Community Relations Director at OPC, said he expects the new facility to help OPC be more inclusive for all age groups.

“We won three first place awards this past October from the Mississippi Parks and Recreation Association, one for adult-driven sport and social clubs,” Davis said. “Adult sports can blossom out of this, on top of actually serving a greater number of young kids and finally getting the schedules to where they’re not crazy.”

Both Gaines and Davis say that Oxford’s Park Commission is going above and beyond comparable programs in terms of programming and events.

“Our park commission, what we offer, is greater than anybody else that you can even touch,” Davis said. “All these places that people think are bigger than Oxford, we do more.”

Due to the number and scale of programs, OPC has people from as far as Panola County, Holly Springs and Booneville enrolled in their programs. This contributes to the overcrowding issues, but Gaines says it’s a good problem to have.

In the event that OPC reaches its capacity, parents have few options for their children who still want to play sports. According to Gaines, the Upward basketball league returned this year after a hiatus. Because of that, OPC originally planned to lose players this year.

“We had budgeted that we would lose about a hundred kids this year,” Gaines said. “The thing is, we didn’t lose kids,” Gaines said. “So if this growth continues, the next option for us is to go back to playing on Saturdays and borrow school gyms.”

Gaines also said the final option, and one he has a “big problem with,” is closing registration when enrollment reaches a certain limit, because OPC does not want to turn people away.

For Oxford native Jay Wortham, 14, Saturday games would not be the end of the world.

“I’ve played [for OPC] since I was 7,” Wortham said. “Anytime I get to play basketball is fine with me.”

With the new Oxford Activity Center projected to be completed by January 2019, the majority of the overcrowding problems are expected to be solved. Until then, Davis and Gaines say OPC is working to listen and respond to citizen concerns in order to make programs as efficient and successful as possible.