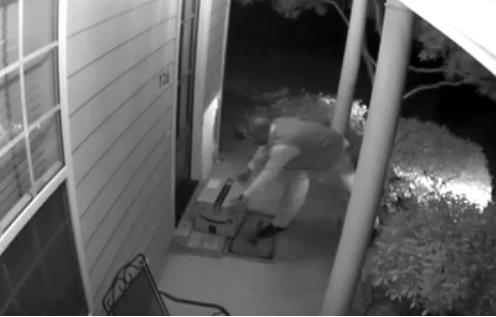 Lafayette County resident William Kneip installed a security camera in front of his home a month ago and admits some people teased him a bit about it.

However, now he’s hoping footage captured on that camera can help detectives with the Lafayette County Sheriff’s Department find the man who stole a package off his front porch this weekend.

Kneip said a package filled with $350 worth of items from Amazon arrived sometime on Saturday when he was out of town in Memphis. Since no one was home, the package was left at this doorstep.

Kneip received a  camera motion alert on his cell phone and checked the video footage from his recently installed security camera.

On the video, a bald man wearing a light-colored shirt and vest, walked up to Kneip’s porch and picked up the package and walked away.

“All of the items were Christmas gifts for my family back in Mobile,” Kneip said. “Brand new electronics and all.”

Amazon has promised to replace five of the six items at no charge and refund him for the sixth since it was back ordered and wouldn’t arrive in time for Christmas.

Kneip filed a report Sunday with the sheriff’s department and is hoping the video footage helps the detectives in finding the thief.

Kneip lives in Southpointe Commons area off Highway 7 South. He said he hasn’t heard of other packages being stolen in the neighborhood.

“But it’s becoming a nationwide issue and it’s important for us to remember that it can happen here as well,” he said.

“I hope the video will deter people from doing this,” he said. “I hope we can catch the ‘Grinch.’”

If anyone has information in regards to the package or recognizes the man in the video, call the sheriff’s department at 662-234-6421.