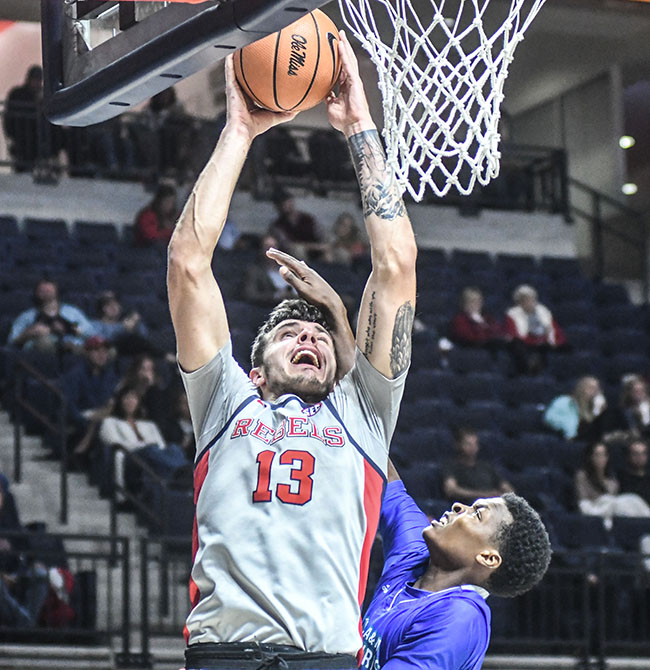 Ole Miss coach Andy Kennedy felt some of his players were getting too comfortable in their starting roles. With enough issues already plaguing the Rebels, that wasn’t going to fly.

What started with every player having a clean slate during practice leading up to the Rebels’ game against Texas A&M-Corpus Christi on Tuesday ended with sweeping change that worked in Ole Miss’ favor.

Kennedy shook up Ole Miss’ starting lineup, and the Rebels responded with an 85-63 rout of Corpus Christi at The Pavilion. Ole Miss led by as many as 28 against an overmatched Corpus Christi team in just its second win at home since mid-November.

In his first start since Nov. 20, Dominik Olejniczak pulled down just one rebound but had his best offensive performance in an Ole Miss uniform, scoring a season-high 15 points to go with three blocks. Justas Furmanavicius matched a career-high with 15 points and grabbed six boards while Deandre Burnett scored 13 points. Terence Davis and Breein Tyree added 11 apiece for the Rebels (6-5).

“We do need to have more ownership within that locker room to hold each other accountable to playing hard,” Kennedy said. “I thought tonight was a step in the right direction.”

Lamenting the Rebels’ effort for much of the season, particularly on the defensive end, Kennedy made wholesale changes to the starting five, sitting Davis, Tyree, Markel Crawford and Marcanvis Hymon in favor of Olejniczak, Burnett, Furmanavicius, freshman Devontae Shuler and walk-on D.C. Davis, who made his first career start.

“You can say, ‘Hey, you’re three possessions away from being 8-2, and the sky’s not falling.’ But you are what your record says you are, and we’re 5-5,” Kennedy said. “Practice is very important to us. So in the last couple of days leading into the game, the team that started was the team that practiced the best.”

The defense still wasn’t great with Corpus Christi (3-7) shooting 42.6 percent from the field, including 50 percent (7 of 14) from 3-point range, and outscoring Ole Miss 30-24 in the paint. Joseph Kilgore paced the Islanders with 17 points while Perry Francois added 12 for Corpus Christi, which came in at No. 343 in the NCAA’s latest RPI ratings.

But Ole Miss scored 17 points off 14 Corpus Christi turnovers and pulled down 25 of its 34 rebounds on the defensive end to finish plus-6 on the glass as the Islanders scored the second-fewest points of any team against the Rebels this season.

“I thought we came out and set the tone defensively and then our offense followed suit,” Kennedy said.

The Rebels relied largely on an inside-out game for most of their offense. The 7-foot Olejniczak had little trouble finishing over the smaller Islanders on the interior, finishing 6 of 7 from the field and 3 of 4 from the free-throw line.

Ole Miss also got some unusual contributions to connect on a season-high 14 3-pointers with nine of those coming in the first half. Furmanavicius, who came in having made just three 3s all season, sank five treys while Davis (3 of 6), Shuler (2 of 4) and Tyree (2 of 3) combined to go 7 of 13 from long range.

“I’ve always worked on my shot,” Furmanavicius said. “Now I’m just knocking them down. That’s it.”

Ole Miss will return to action Friday at The Pavilion against Bradley. Tip is set for 6 p.m.

What to expect from Ole Miss during early signing…