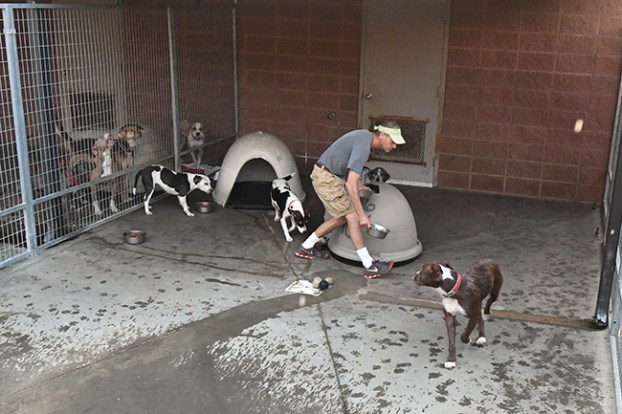 Dogs are fed at the Oxford Humane Animal Shelter in Oxford, Miss. on Thursday, August 3, 2017.

The city of Oxford has taken the first steps toward approving a longer-term contract with the Oxford-Lafayette Humane Society.

After hearing some complaints this summer about how the Oxford-Humane Society Board of Directors were operating, the Oxford Board of Aldermen appointed Aldermen Janice Antonow and Chad McClarty to sit on the OLHS board.

In August, former OLHS board members and employees filed a complaint with the Mississippi Secretary of State’s Office Charity Division.

“They only had two small findings,” Antonow said on Tuesday during the Board of Aldermen meeting. “One was they hadn’t changed their address and the other was that they weren’t following their bylaws, which have been rewritten since and resubmitted to the state.”

Antonow said she has seen improvements and is recommending the board approve a contract with OLHS to provide its animal control services through the end of the fiscal year, which ends on Sept. 30, 2018.

Antonow presented a proposed updated contract at the Board of Aldermen’s regular meeting Tuesday that clearly lists the expectations of the city to the Humane Society which include:

• The board meetings to be held at least every other month; giving the public a three-day notice of the meetings and posting the meeting at the shelter on McElroy Drive and on the OLHS website

• Get board approval for all purchases more than $5,000

Antonow said after she gives the proposed contract to city attorneys for their approval, she will ask her fellow aldermen to vote on it at the next board meeting and then it will be given to OLHS for their consideration.

“None of this is negotiable,” Antonow said. “But I think they’ll agree to it.”

Antonow said there have been “a lot” of improvements made since she started attending the OLHS board meetings.

“The new executive director has gotten a handle on the rodent and roach problem and it even smells better when you walk in,” she said. “We have a 25-year relationship with (OLHS). For us to switch to someone else right now, doesn’t make sense.”

Without naming any particular group, Antonow gave credit to other animal rescue organizations for helping to lower the population at the shelter, which is now at about 100 animals, down from 200 in August.

BY ALEX ROZIER Mississippi Today   Tens of thousands of Mississippi drivers will be allowed back on the road in... read more