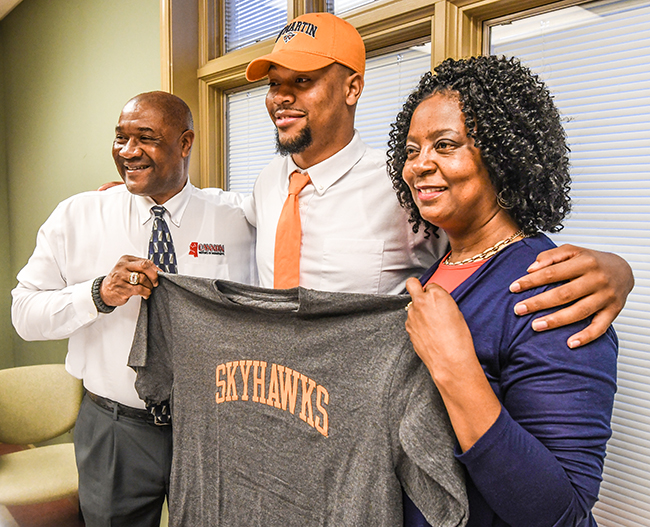 Korbin Harmon, center, with his parents Michael, left, and Kajavia, holds up a t-shirt after signing to play with Tennessee-Martin, in Oxford, Miss. on Wednesday, December 20, 2017. The younger Harmon played at Oxford High and later Pearl River Community College.

The first experimental round of an early signing period for college football got underway on Wednesday and will last through Friday. High school and junior college athletes across the nation are able to put the stress of picking a school to bed earlier than February but for Oxford, Lafayette and Water Valley players they are choosing to wait another month and a half.

While zero area high school players elected to sign a letter of intent this week there were a few former players that picked their final destination at the collegiate level.

While there he improved his skill set and also packed on about 40 more pounds. It helped Gooch get noticed by SELA as well as Alcorn State who was in heavily on him along with Georgia Southern who got into the sweepstakes late.

“It’s hard. It’s an everyday grind over there in JUCO ball,” Gooch said of being prepared for the next level. “I Just feel like (SELA) have a family over there.”

Gooch will enroll for spring classes in January and beginning spring drills with Lions. He will be play at the guard position.

On National Signing Day in February of 2016 Harmon joined Ole Miss’ ranks as a preferred walk-on then played for Pearl River Community College this past season. On Wednesday morning he signed with UT-Martin to become a Skyhawk.

For the past two seasons Nielson has played with Itawamba Community College where he committed two in 2016. The next two years he will play at Henderson State who he signed with Wednesday at Oxford High School. He will line up as a defensive tackle for the Reddies.

“I liked the coaching staff and the facilities are awesome,” Nielson said. “I can go out there and play and show out.”