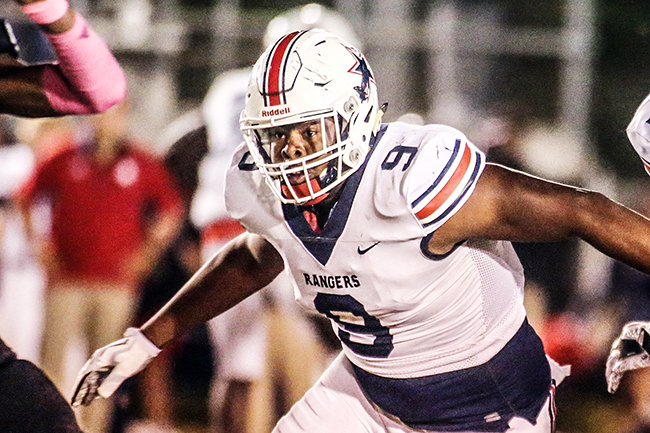 Northwest Mississippi Community College defensive tackle Hal Northern is one of at least 10 players expected to sign with Ole Miss on Wednesday during the early signing period, which will run through Friday. (NWCC Sports Information)

Ole Miss is short on numbers at quarterback while trying to shore up a defense that finished among the nation’s worst in several categories this past season.

The Rebels took a step toward addressing those issues Wednesday.

As part of college football’s inaugural early signing period, Ole Miss inked 15 players with more than half of them coming on the defensive side of the ball. Ten players were previously verbally committed to the Rebels, including their top-ranked commit, Long Beach Poly (California) quarterback Matt Corral.

“It was kind of what we expected, trying to fill some needs especially at some certain positions,” Ole Miss coach Matt Luke said. “I thought it was a really, really good day.”

The 6-foot-2, 196-pound Corral, who made it official after flipping his commitment from Florida last week, is the nation’s No. 3-ranked pro-style signal caller, according to the 247Sports Composite ratings, and will end his prep career by playing in next month’s U.S. Army All-American game. Just as important as Corral’s talent, Luke said, is his intention to enroll in time for spring practice and quickly provide more depth at a position that’s left with just two full-time scholarship quarterbacks on the roster with Shea Patterson transferring.

“I thought it was imperative that we go out and sign a mid-year quarterback to come in and compete in the spring,” Luke said. “We were able to do that with one of the top quarterbacks in the country in Matt Corral. Tremendous, tremendous talent.”

Defense has been the emphasis of the class with Luke and his staff seeking reinforcements for a unit that finished outside the top 100 nationally in scoring defense, total defense and run defense during their 6-6 campaign this fall. Ole Miss signed 10 defensive players, including four defensive linemen — five if you count St. Clair County (Alabama) two-way lineman Jalen Cunningham, a four-star prospect that picked the Rebels on Wednesday and will begin his college career on defense — and three linebackers.

“He can be a rush end. He can play inside,” Luke said. “There are a lot of comparisons to Breeland Speaks just because they’re from the same school, but just a tremendous athlete and tremendous player. Has a lot of upside as a pass rusher and a run stopper. He can fit in kind of a bunch of different spots.”

The 6-3, 215-pound Dasher will be expected to make an immediate impact. Luke said Hess and Jones have the skill sets to create more competition with the linebackers already on the roster, which he hopes can lead to more production at a position where Ole Miss had just one player (Gates) record more than 42 tackles this season.

“What we’re looking for is physical guys and guys that can run,” Luke said. “Vernon Dasher is a little bit of an undersized guy, but he can really, really run and hit. Then you’ve got Hess, who’s got a lot of length and has a chance to grow into a big linebacker. Jacquez is more of a big, physical mike linebacker that we’ve been looking for so. I just think you identify your needs and go after the best available.”

Running back was also a need with 1,000-yard rusher Jordan Wilkins on his way out and D’Vaughn Pennamon’s immediate future uncertain after dislocating his knee last month, and Ole Miss addressed it with Jones County Junior College’s Scottie Phillips, who will be a mid-year addition, and Isaiah Woullard, who grayshirted last season.

As for the committed players that didn’t sign, Meridian High defensive end Deuntra Hyman and Lee High (Montgomery, Alabama) defensive back JaKorey Hawkins will wait it out until the traditional signing day Feb. 7. With time for them to still change their minds, Luke said the approach with them is simple.

“You just keep recruiting them,” he said.