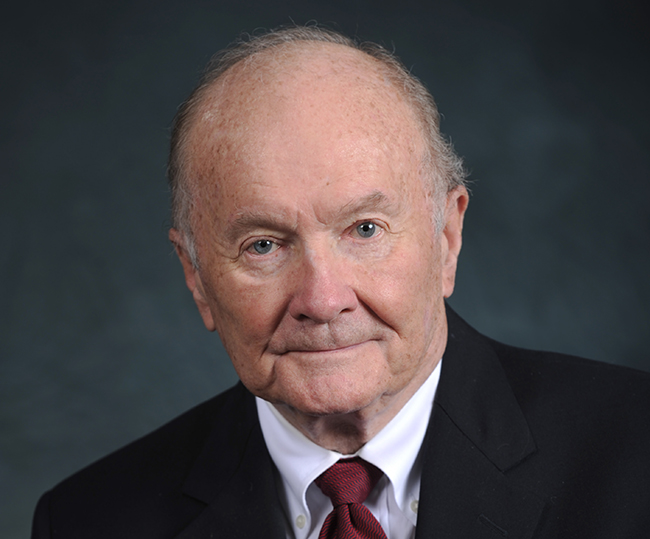 Jack F. Dunbar passed away peacefully on December 20, 2017 at home in Oxford, Mississippi. The son of Elizabeth Mohler Dunbar and John Francis Dunbar, he was born on March 15, 1933 and grew up in Indianola. He attended Indianola High School and Millsaps College.

At Millsaps he joined the Pi Kappa Alpha fraternity and was involved in the theatre. Because of his leadership skills, he was asked to join Omicron Delta Kappa Leadership Honorary. Because of his appreciation of his Millsaps experience, he later endowed the Millsaps College Philosophy Department’s annual Dunbar Lecture Series.

During his almost 60 years of law practice, Jack was active in The Mississippi Bar. He served as President in 1983-84, and later was elected to the Board of Governors of the American Bar Association. He was awarded a Lifetime Achievement Award by the Mississippi Bar in 2010.

Jack began his law practice in Clarksdale and joined the firm Sullivan Dunbar and Smith. In 1978, he moved to Oxford and joined what is now known as Holcomb, Dunbar, Watts, Best, Masters and Golmon, P.A. where he was the senior partner. As he advanced as a trial lawyer, Jack was elected to many professional organizations, including the prestigious American College of Trial Lawyers. He was listed in all editions of Best Lawyers in America and was published in The Mississippi Lawyer, the Mississippi Law Journal and For The Defense.

Because of his reputation for utmost integrity and for being fair and honest with all sides to a dispute, he was selected as one of the fee arbitrators in the historic Mississippi Tobacco Litigation where billions of dollars were at stake.

As he matured, his practice began to include mediation. He was selected to attend the Harvard Law School Program for Instruction for Lawyers, Mediation Training, in 1998. As with lawyering, he quickly became known as one of the most outstanding mediators in the State of Mississippi.

Jack Dunbar was deeply and well-loved not only by his family, but also by his many friends. Jack loved life and the variety of people it offered. He was an avid tennis player and loved fishing, especially with his sons and his grandchildren. And no one loved a friendly poker game more than Jack Dunbar. Jack loved all types of people and could start a conversation and befriend anyone. Jack was one of the best story-tellers you could ever meet.

He always wanted to tell a joke or a story to make his new or old friends smile. Jack cherished his time with the Smitty’s Breakfast Club in Oxford where all the local wisdom and news was shared and discussed among its members. He was also pleased to be an accepted occasional guest of the Weaver Gore Coffee Club in Jackson having the same local purpose. He served his community. He was named Oxford Citizen of the Year in 1990 for his work in the strategic plan for the community hospital. He was named Citizen of the Year in 2012 by the Oxford School District for efforts to help children in need of eye care.

Jack is survived by his wife Patsy Englehard of Oxford, and by his three lawyer sons John H. Dunbar (Marty) of Oxford, Thomas T. Dunbar (Mary) of Jackson, and David C. Dunbar (Cindy) of Ridgeland. He also had seven cherished grandchildren of whom he was so proud – Peter, Andrew, Thomas, Christopher, Wirt, Charlotte and Mary. He also would require that his three surviving dogs be mentioned since he loved them also very much—Daisy, Pepper and Sam.

At Jack’s request, there will be no funeral or formal memorial service; instead, Jack desired that his friends and family gather for a celebration of his life, which is presently planned for New Year’s Eve in Oxford from 4-7 pm. Further details will be made available through the Holcomb Dunbar Law Office, 662-234-8775 or Dunbar Monroe Law Office, 601-898-2073.

In lieu of flowers, donations may be made to the Oxford Lafayette Humane Society, 413 McElroy, Oxford, MS 38655 or the UM Foundation—Jack Dunbar Scholarship Fund, 406 University Avenue, Oxford, MS 38655.