How will Ole Miss’ early enrollees fit in? 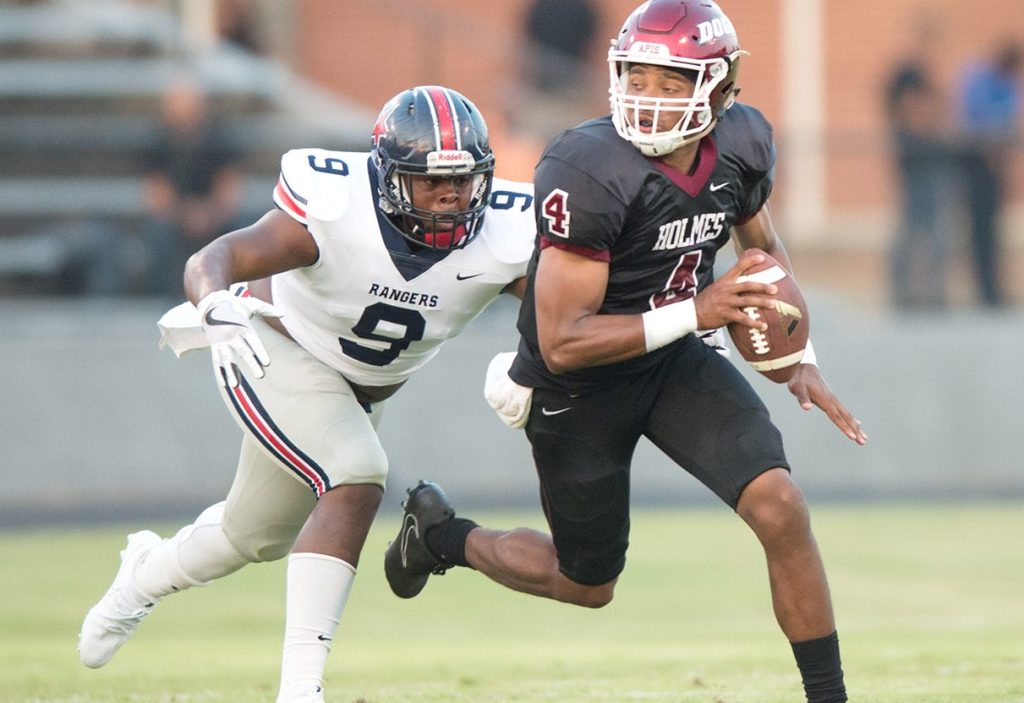 Some of the signees will get to campus sooner than others.

Quarterback Matt Corral, receiver Demarcus Gregory, defensive lineman Hal Northern, linebacker Vernon Dasher and running backs Scottie Phillips and Isaiah Woullard will get their college careers started early as mid-year enrollees who will go through spring practice, adding depth and competition at positions that are in need of it.

“We didn’t have very many mid-year spots, so I think that was big for us,” Ole Miss coach Matt Luke said. “We only had six, so we had to really utilize those six mid-year spots as best we could.”

Corral, Ole Miss’ highest-ranked signee, will report to campus after playing in the U.S. Army All-American Game next month. Luke said it was “imperative” to bring in an early enrollee at quarterback to help with the numbers at the position with Shea Patterson’s transfer to Michigan leaving Jordan Ta’amu and redshirt freshman Alex Faniel as the only full-time scholarship quarterbacks on the roster.

With the lack of bodies there, Corral, a consensus four-star recruit, may have the talent to quickly move up the depth chart.

“Matt has a big arm and good mobility that gives him an opportunity to extend plays,” offensive coordinator Phil Longo said. “He is a huge competitor, and I think he plays with a chip on his shoulder.”

Dasher, Northern and Phillips are expected to compete for immediate playing time as junior college transfers. The 6-foot-3, 215-pound Dasher, an NJCAA first-team All-American, racked up 98 tackles this season for Coffeyville Community College, the kind of production that lacked at the second level of Ole Miss’ defense this season with leading tackler DeMarquis Gates, who’s out of eligibility, the only linebacker who recorded more than 42 tackles.

“(Dasher) is smart and has great ball skills,” linebackers coach Bradley Dale Peveto said. “He is really good in coverage and against the run, but the thing that jumps out is his ability to make plays in space.”

Barring anything unforeseen, Benito Jones and Josiah Coatney will return as starters on the interior of the defensive line, but Northern, another NJCAA first-team All-American, should spice up the competition. Northern lacks the prototypical size for a defensive tackle at 6-2 and 290 pounds but used a high motor to collect 15.5 tackles for loss and 7.5 sacks this season at Northwest Mississippi Community College.

“Hal is a very explosive defensive lineman,” defensive line coach Freddie Roach said. “He has a knack for tackles for loss, plays relentless and has a big upside.”

With 1,000-yard rusher Jordan Wilkins out of eligibility and D’Vaughn Pennamon’s immediate future uncertain after having surgery to repair a dislocated knee, the timing is ideal for Phillips and Woullard to join the Rebels’ backfield. Woullard, Mississippi’s all-time prep leading rusher, delayed his enrollment as a grayshirt signee in the 2017 class while the 5-9, 198-pound Phillips could be a plug-and-play option after rushing for 2,282 yards and 27 touchdowns the last two seasons at Jones County Junior College.

“Scotty is a compact runner and low to the ground,” running backs coach Derrick Nix said. “He is a great finisher with tremendous speed.”

Gregory will add to arguably the Rebels’ most talented position with All-American A.J. Brown returning along with DaMarkus Lodge and DK Metcalf on the outside. Van Jefferson and Tre Nixon are on the way out as transfers.

The 6-2, 200-pound Gregory, a four-star recruit, missed his senior season at Byrnes High (South Carolina) with a torn ACL. If he’s healthy enough to go through spring practice, Gregory will add to the competition out wide and get a leg up on possibly cracking the rotation come the fall.

“He’s a big-body receiver that matches some of the guys that we’ve had here in the past,” receivers coach Jacob Peeler said of Gregory. “He is great after the catch, is physical and breaks tackles.”

With early signing period over for Ole Miss, what’s…