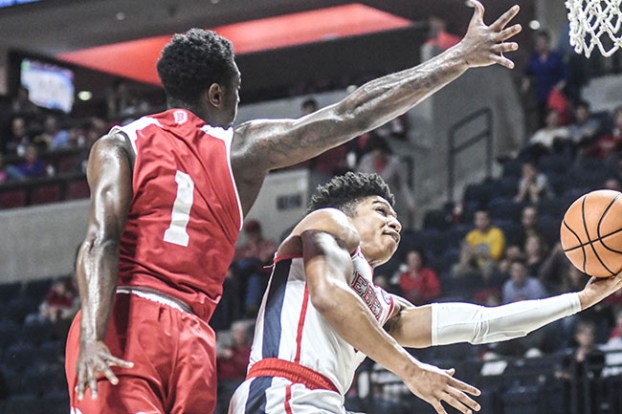 Bradley (10-3) was led by Darrell Brown with 16 points and five assists.

Ole Miss was 29 of 63 (46 percent) from the field, including 12 of 27 (44 percent) from the 3-point line. The Rebels forced Bradley into 22 turnovers and got a game-high eight rebounds from Justas Furmanavicius.

Bradley: The Braves were picked seventh in the Missouri Valley Conference preseason coaches poll, but were riding a three-game winning streak in a promising 10-2 start. None of those positives materialized in their first game against a Power Five conference opponent. Brown, a 5-10 sophomore guard, was the only effective weapon.

Ole Miss: The Rebels have won three of four games and rediscovered their 3-point shot heading into Southeastern Conference play. After hitting 14 shots from 3-point range in the previous game, the Rebels followed up by hitting 8 of 14 early on Bradley, including 5 of 7 from Davis. The Ole Miss bench outscored Bradley 41-19 and outscored the Braves in the paint, 32-12.

Bradley entered as one of four schools nationally to make 40 percent of its 3-point shots and hold opponents to under 30 percent. At halftime, the Braves trailed by 20 points, was 1 of 8 (13 percent) from 3-point range and had surrendered 8 of 16 (50 percent) to the Rebels. Aside from Brown, the Braves finished the first half 2 of 18 (11 percent) from the field, including 0 of 6 from 3-point range.

Ole Miss: The Rebels host South Carolina on Sunday, December 31 at 5 p.m. in the SEC opener for both teams.

Rebel Rags owner Terry Warren has been reinstated by Ole Miss pending an appeal of the allegations against the Oxford-based... read more