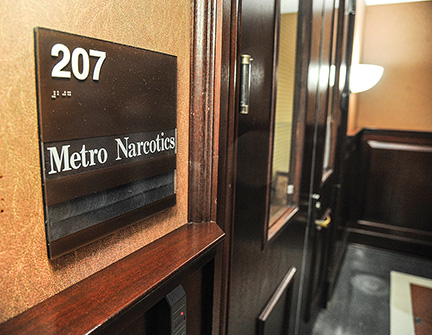 The Lafayette County Metro Narcotics Unit is housed in the county chancery building on the Square.

An interlocal agreement was signed by all three governing bodies to create the drug enforcement unit.

Now, the three governments overseeing their respective law enforcement agencies are back at the table to update the current interlocal agreement, which serves as the governing document for the unit.

Oxford City Attorney Pope Mallette created the new interlocal agreement and has sent it to Lafayette County and the University of Mississippi for their review and acceptance.

Originally a three-page document, the new proposed interlocal agreement is 10 pages long. While much has remained the same, like the three heads of the local police departments heading up the unit as administrators, or Control Group, there are some new additions and changes.

One change includes the amount each government contributes. The unit used to receive a healthy amount of grants; however, due to state and federal cuts, the number of grants have drastically dwindled. Where the city, county and university 10 years ago provided $75,000 each toward the unit, in the new contract it calls for each governing body to provide $150,000 a year.

The proposed contract goes into more details in regards to the duties of the Control Group, which includes the review and approval of all operating policies of the Drug Unit, including but not limited to policies on the use of confidential informants and any standard agreements relating to the use of confidential informants, policies regarding the handling of evidence, and policies regarding the seizure, use, and disposal of property seized by the Drug Unit.

The Drug Unit is required to pursue accreditation from an external reviewing agency or association to ensure best practices with respect to general law enforcement practices, the enforcement of drug laws, the use of confidential informants, the handling of evidence, and the seizure, use, and disposal of property seized by the Drug Unit.

The Oxford Board of Aldermen voted Tuesday to table approving the agreement to give the county and university attorneys more time to respond with any recommended changes and will reconsider the agreement at their Jan. 2 meeting.