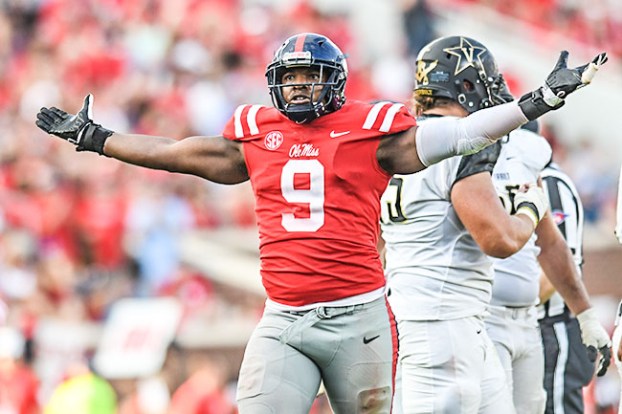 Ole Miss defensive tackle Breeland Speaks (9) celebrates against Vanderbilt at Vaught-Hemingway Stadium in Oxford, Miss. on Saturday, October 14, 2017. Speaks is electing to forgo his senior year of college and enter his name for the upcoming 2018 National Football League Draft, he announced Tuesday, December 26, 2017.

Ole Miss’ Breeland Speaks will get a head start on his professional career.

The Rebels’ defensive lineman announced Tuesday he will forgo his final season at Ole Miss and enter next year’s NFL Draft. Speaks, who made the move from defensive tackle to end this season, is a fourth-year junior after redshirting in 2014.

“There are so many people I want to thank, including Chancellor (Jeffrey) Vitter, (athletic director Ross) Bjork, Coach (Matt) Luke, the coaching staff, my teammates and everyone at the university for an awesome four years,” Speaks said in a statement. “Most of all, I thank Rebel Nation for the incredible support they gave me from day one. I was proud to lock the Vaught every Saturday in my home state, and now I look forward to representing Ole Miss at the next level.”

Speaks finished his career with 127 tackles, 15 tackles for loss and nine sacks with most of that production coming in his final season. Making the move from tackle to end five games into this season, the 6-foot-3, 285-pound Speaks was a disruptive force off the edge, finishing second on the team with 67 tackles and third with eight tackles for loss.

He ranked sixth in the SEC with seven sacks and had a team-high eight quarterback hurries on his way to second-team All-SEC honors. Speaks played in every game the last three seasons with 19 starts.

“I have seen Breeland grow as a person and a player over the last four years, and we’re excited to see him take this next step in his career,” Luke said in a statement. “I am particularly proud of the leadership he brought to our team amidst the challenges we faced. He is a true Rebel, and we look forward to watching him continue our program’s rich NFL tradition.”

Speaks is projected to be taken in the fourth round of next year’s draft by WalterFootball.com. The 2018 draft will be held April 26-28 at AT&T Stadium in Arlington, Texas.

His declaration also means the Rebels are losing their top two pass rushers. Marquis Haynes, another projected mid-round pick, is out of eligibility after recording a team-high 7.5 sacks this season.