The End of All Music finds new beginning on Square 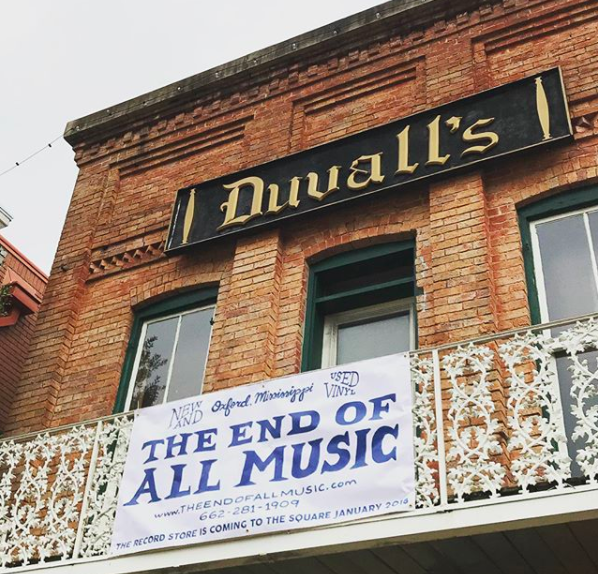 The End of All Music’s new location will open January 19 in the upstairs space of the Duvall’s building, above Nella Boutique.

The End of All Music record store is moving to downtown Oxford from North Lamar Boulevard next month.

The official grand opening is set for Jan. 19, and will feature a set from local musician Cody Rogers, who will play tracks from his new solo album. The new location is the upstairs space in the Duvall’s building, which formerly housed Hunt Marketing.

The location is one of many store owner David Swider considered, but he says the upstairs space will serve a deliberate purpose.

“I’ve always really liked record stores that are upstairs,” Swider said. “As my carpenter says, when you’re walking upstairs to a record store, you’re doing it with a purpose. You’re not window shopping or meandering around.”

The End of All Music first opened its doors in 2012, and since then has grown to include a variety of vinyls, from Beck to ZZ Top. The store also carries store merchandise and cassette tapes from independent artists. There are around 20 thousand individual records total, but Swider says the move isn’t as daunting as it may seem.

The goal is to keep the store open during the entire transition, and to accomplish the big move all in one night. He’s recruited a team of 15 friends and family to help pull it off. In the week before the move, Swider says customers need to look out for huge sales at the North Lamar Boulevard storefront if they want to get records and equipment at a steep discount.

“We’re going to close at 5 p.m. and move until it’s done, moving the newest albums first and keeping the old space as a week-long discount store,” he said. “It may seem kind of crazy, but that’s how we operate.”

One advantage of the new location will be the store’s extended hours. At the moment, Swider says he plans on staying open until 9 p.m. Wednesday through Saturday nights, which will allow for local and visiting artists to stop in for acoustic performances and smaller shows.

Cody Rogers, a local musician and lead singer of the band Holy Ghost Electric Show, will be playing the grand opening and says the move will help End of All Music do “what it does best,” providing music and art in a space that builds community. His solo debut, “My Heart is the Loneliest Rodeo,” will be available on CD and, exclusively at The End of All Music, on cassette tape.

“I’ve been emptying my bank account at End of All Music for about 5 years now,” Rogers said. “We talked about doing something together early in 2017 and the way cards fell, my album release and their grand opening are happening at the same time. End of All Music has brought me and many others a lot of joy and I couldn’t be more excited to be a part of it.”

Many of the store’s customers say they are looking forward to the new location, because it will make the store more accessible. Adam Morris, a self-described “music connoisseur,” says the later hours and small shows will be an asset to the Square, especially when waiting for tables at downtown restaurants on busy nights.

“We’ll finally have a place downtown to listen to good, free music in the evenings,” Morris said.

The downtown location doesn’t mean the interior of the store will change, Swider says. The interior of the new store will be similar to the current location, down to the white and blue record racks and deep royal blue walls, but with the addition of two picture windows overlooking the east side of the Square.

At the end of the day, Swider says one thing he’s looking forward to the most is introducing the store to a broader audience and having a place for music lovers to gather on the square.

“Other than Square Books, there’s not a lot of businesses like that there. I’ve always loved stores like this in the past, like Uncle Buck’s or Hotdog Records,” Swider said. “It’s something Oxford hasn’t had in a long time, and something I think Oxford deserves to have.”