Top Oxford stories from the first third of 2017 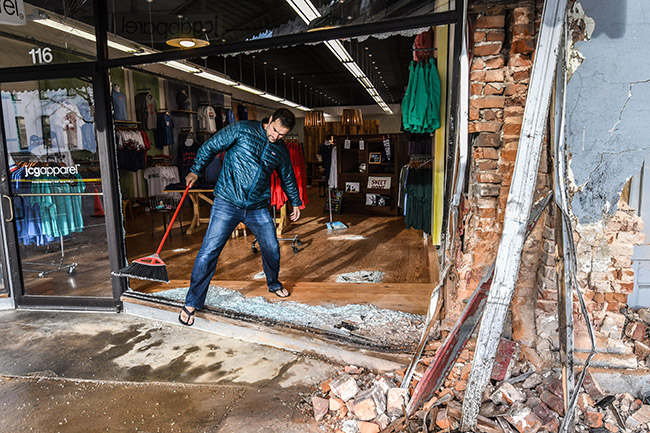 Lewis Herrington walks through the front of jcg apparel in Oxford, Miss. on Monday, February 27, 2017. According to the Oxford Police Department, the driver of a truck suffered a medical episode and crashed into the building around 5:30 a.m. The driver, heading westbound on Jackson Avenue, went between two crape myrtles on the Square, knocking over an electric box. It then struck a support to an overhang at Oxford Grillehouse and a parking meter before crashing into the corner of the restaurant and jcg apparel. It bounced off the building, knocking over a light pole and another parking meter before coming to rest against a support for the balcony at Wilson Law Firm above Ajax Diner. Photo taken by Bruce Newman.

Editor’s Note: This is the first of four stories highlighting local news in 2017. Coming up this week:

While President Donald Trump taking office dominated the headlines of all national media, Oxford had its fair share of controversy in the first quarter of 2017.

The day after his inauguration, hundreds of men, women and children gathered on the Square to take part in the Oxford March for America that focused on equal rights for all as a backdrop to the inauguration.

Many chanted, “Women’s rights. human rights,” while some chanted “Love above all else,” and “We are the people.” There were American flags and rainbow flags. Many of the marchers carried signs. Some read “Love Trumps Hate,” and “I’m with Her.”

A week later news of two legislative bills (House Bill 1325 and Senate Bill 2611) that would disband the Mississippi Arts Commission and put it under the auspices of the Mississippi Development Authority got out, and many in the Oxford art community and around the state took immediate action to campaign against it – and they won. Both bills died in committee.

Also in January, Water Valley residents rallied against developers proposing to expand a mobile home park that would be both inside and outside of city limits. Residents packed a Yalobusha County Board of Supervisors meeting to protest the development.

A few Oxford businesses took a big hit in February – literally – after a man suffering from a seizure drove his truck into the the Square.

The driver, heading westbound on Jackson Avenue, went between two crape myrtles on the Square, knocking over an electric box before hitting a support beam to an overhang at Oxford Grillehouse, a parking meter and eventually the corner of the restaurant and jcg apparel. The truck bounced off the building, knocking over a light pole and another parking meter before coming to rest against a support beam for the balcony at Wilson Law Firm and above Ajax Diner.

The driver suffered minor injuries, but no one else was injured. The businesses have since completed all repairs.

JC Penny announced it would be closing the doors to its Oxford location in March, and a property manager at The Links was fired after a video of her harassing residents went viral.

But there was good news for some Oxford businesses as well.

In February, Roseburg Forest Products announced the sale of its Oxford plant to Wilsonart Engineered Surfaces. Roseburg closed in 2016 and the plant remained empty for about a year before Wilsonart purchased it, bringing back about 30 jobs to Lafayette County.

Winchester Centerfire received a $91 million extension to a U.S. Army contract for ammunition that’s expected to be completed in July 2018.

In late March, a former board member of the Oxford-Lafayette Humane Society went public with concerns on how the board was operating, claiming the executive board was holding illegal meetings behind closed doors and making decisions without consulting the rest of the board, in particular, a decision to use a $600,000 donation for a reduced spay and neuter clinic. A few other board members also spoke out and were soon removed from the board.

After the executive director and several employees walked out, the Oxford Board of Aldermen and Lafayette County Board of Supervisors got involved and appointed Alderman Janice Antonow and Supervisor Chad McClarty to sit on the OLHS board.

The Board of Aldermen voted to only renew the city’s contract with the shelter on a month-to-month basis until changes were made, that included updating bylaws and holding public, open meetings.

Last month, Antonow said several improvements have since been made and recommended the contract be reviewed and approved for the rest of the fiscal year, which ends Sept. 30. The board is expected to vote on the matter in January.

Residents at Riverside Place public housing complex spent the first quarter of the year trying to find new places to live as the deadline for the complex to close, Feb. 27, approached. With the help of Interfaith Compassion Ministry and donations from the public, all 98 remaining families were able to find new homes through a voucher system, with their utility and moving deposits paid for. The last family moved out in July. The Oxford Board of Aldermen has not yet voted on what to do with the property once demolition is complete.

Other headlines in the first four months of 2017 included:

• On March 30, Circuit Court Judge John Gregory sentenced Joseph Lyons, 23, to life in prison without the possibility of parole Thursday after he pleaded guilty to the murder of Zacharias Hercules McClendon in 2013. Lyons was one of three charged with the crime. Derick Boone pleaded guilty in April 2016 and was also sentenced to life in prison. Steven Wilbanks has a Jan. 12, 2018 trial date.

• In March, the Lafayette High girls basketball team defeated Ripley 55-45 in the MHSAA Class 4A state championship inside the Mississippi Coliseum. It was the first time in 35 years the school won the Class 4A basketball title.

• Plans for a new Activity Center were stalled a bit after a geotechnical engineer discovered 12-feet of trash under the proposed building site. However, the city decided to find the additional $1 million to remove the trash and plans for the new center moved forward. The activity center will consist of four basketball courts, a walking track and a large enclosed area for gymnastics. Construction is expected to begin in January.

• Former Ole Miss tight end Evan Engram was drafted by New York Giants in the first round in April. Engram was the second tight end taken, going to the Giants with the 23rd overall pick. Engram is the 23rd first-round pick in school history and the fourth in the last two years after Laremy Tunsil, Laquon Treadwell and Robert Nkemdiche were all taken in the first round a year ago. He’s the first Ole Miss tight end to be drafted since Kris Mangum in 1997.