Top stories from the second quarter of 2017 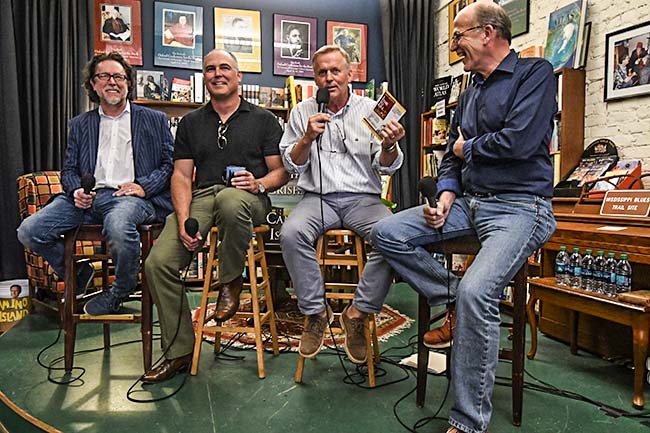 The middle months of 2017 had stories of great personal accomplishment, the inauguration of a new Oxford mayor and the resignation of Ole Miss’ football coach.

In May, there were repeated headlines that included the name of a man who went from a self-proclaimed First Amendment rights activist to a convicted felon in a matter of weeks.

Matt Reardon was arrested on May 1 after standing in front of the Confederate Statue on the Square and waiving the Mississippi state flag. After arguing with a sheriff’s deputy about his Constitutional right to be there, he was arrested after failing to comply with the deputy’s orders to move away.

Reardon took to Facebook to garner support for his claim his First Amendment rights were violated by the arrest. Conversations often turned heated and Reardon posted photos of himself holding an AR-15 rifle along with written threats against a local business and several Oxford residents.

On May 26, he was arrested again – this time for felony aggravated stalking. Two weeks later, Reardon pleaded guilty and was put on five years of probation.

Reardon was ordered to remain out of Lafayette County during his probationary period with the exception of any required court appearances. His guns were turned over to the sheriff’s department.

Citizen of the Year

Also in May, Darlene Copp was named Citizen of the Year from the Oxford-Lafayette Chamber of Commerce for her dedication to Oxford’s history.

Copp, in conjunction with the Oxford-Lafayette County Heritage Foundation, worked on the two city-owned museums, the L.Q.C. Lamar House Museum and the Burns-Belfry African American Museum and Multicultural Center.

She is credited with developing the exhibits at both museums, gathering volunteers and conducting extensive research to learn the history of both buildings, finding artifacts and writing the test for the exhibits.

Just a few days before Copp’s recognition, the Oxford community said goodbye to Carolyn Ellis Staton, the first female provost at the University of Mississippi who died May 19 at her home in Oxford at the age of 71.

Clinton praised the life and work of Staton and the relationships she built.

In June, Oxford’s new mayor, Robyn Tannehill was sworn into office. She had no opposition in the mayoral race. She served as an alderman for Ward 2 for four years before deciding to run for mayor when former Mayor Pat Patterson announced he would not be seeking re-election.

In the June municipal elections, Ward 6 Alderman Jason Bailey retained his seat, beating out his Democratic opponent Wayne Andrews. In the Ward 2 race that was opened up when Tannehill decided to run for mayor, Mark Huelse took the most votes against his opponent Paula Shanks.

Joining them in the June swearing-in ceremony was Ward 1 Alderman Rick Addy, who retained his seat on the board during the Democratic primary in May when he won against Patrick Herbert. Ward 5 Alderman Preston Taylor also retained his seat, beating out Theressa “Terry” Hilliard in the primary.

Aldermen from Wards 3, 4 and At-Large had no opposing candidates qualify against them.

On July 20, Ole Miss head football coach Hugh Freeze abruptly resigned after a “concerning pattern” emerged involving the use of a university-issued cell phone by Freeze.

The University announced Freeze’s resignation a day after USA Today reported a call Freeze made in January 2016 which was believe to be associated to an escort service.

Vice Chancellor for Intercollegiate Atheetics Ross Bjork said in a press conference where Freeze’s resignation was announced that the school released Freeze’s work-related phone records via a public records request for a six-day span in January 2016.

Freeze redacted numbers from those records before they were released.

The call to the escort service was not redacted and believed by Ole Miss to be a misdial until it was brought to their attention the previous week. A more thorough search of Freeze’s phone records revealed a pattern of unacceptable behavior, Bjork said.

On August 21, all protected eyes turned skyward as Lafayette County, and the United States, looked for the sun to disappear in a solar eclipse.

While the county was not in the path of totality that resulted in complete darkness for up to five minutes in places like Nashville and Kansas City, the area was treated to 95-percent totality, making for an impressive show.

However, experiencing the eclipse in full was denied to local schoolkids as faulty glasses purchased from Amazon forced the cancellation of a viewing party in several Lafayette County Schools. The glasses, ordered by the district, were not shipped after the supplier discovered that NASA could not certify the glasses as safe to use during the eclipse.

Instead, the students had a watch party, including NASA’s live feed of the eclipse.

In August, the University of Mississippi announced in August their plans on opening the William Magee Center for Wellness Education in the university’s new South Campus Recreation Facility.

The center’s namesake was an alumnus of the University of Mississippi’s Sally McDonnell Barksdale Honors College and Croft Institute for International Studies. He also ran track for Ole Miss and was named to the SEC academic honor roll. During his struggle with drug addiction, he overdosed in 2013.

Chancellor Jeff Vitter said the university’s “intention with the Magee Center is to direct expertise from several disciplines across our campuses to develop creative solutions that will significantly reduce alcohol and drug misuse.”

Other top stories during the months of May-August included:

• On May 14, Ole Miss softball capped a Cinderella run in the SEC Tournament, capturing their first SEC Championship. The Lady Rebels became the lowest seed to ever win the tournament and never trailed in the four games played during the week of competition. The conference title gave the team an automatic bid to the NCAA tournament, where the Rebels hosted a Regional Tournament in Oxford and advanced to the Super Regional Tournament where they were elminated by UCLA.

• On May 17, U.S. Marshals Service Gulf Coast Regional Fugitive Task Force arrested Chris Paten at a house in Jackson, who was charged with the murder of Lafayette County resident Kenya Jawaan “KJ” Hill. According to reports, Paten shot Hill four times in the upper chest and head area after an argument broke out between him and Paten at a residence in the Brittany Estates apartment complex on March 9. Hill was flown to the Regional One Medical Center in Memphis where he died a week later from his injuries. Paten is still awaiting trial.

• On June 20, author and former Oxonian John Grisham came back to Oxford to visit Square Books to sign copies of his new book, “Camino Island.”

• In June, friends, family and fellow law enforcement officers came together to write emails and letters to the Mississippi Department of Corrections to make sure the man responsible for killing University Police Officer Robert Langley stayed in prison. The MDOC announced that Daniel Cummings, who pleaded guilty in late 2006 to manslaughter by culpable negligence, would be released after serving half of his 20-year sentence under MDOC’s Earned Release Supervision. However, when he was sentenced, prosecutors said he would have to serve at least 85 percent of his sentence. Less than 24 hours later, MDOC announced Commissioner Pelicia E. Hall denied Cummings’ early release.

• On July, a 6-month-old potbelly pig won the hearts of people all over the country when a video on Facebook posted by the Oxford-Lafayette Humane Society showed the little pig, named Mavis, doing tricks. Mavis was surrendered to the shelter in June and the video was posted on July 11. After seeing the video, an Oxford family adopted Mavis.

• In August, the Oxford community responded in force to help victims of Hurricane Harvey that slammed into the Texas coast on Aug. 25. Individuals, businesses and the Oxford-Lafayette Chamber of Commerce came together for a large donation drive for water, diapers, cleaning products and other necessities that were delivered to Texas.

• On Aug. 28, LOU-Home, a private housing advocacy nonprofit group partnered with local developer Stewart Rutledge to obtain $15 million in competitive funding to construct 96 new homes, which will be leased to the area’s workforce community. The homes will be largely concentrated in two neighborhoods. The Belle Rivers development will be located on 20 acres just east of the now-empty Riverside Place Apartments. The other development, dubbed Eastover, will be nearby, located north of the Brittany Woods subdivision on 60 acres of land.

The End of All Music finds new beginning on…