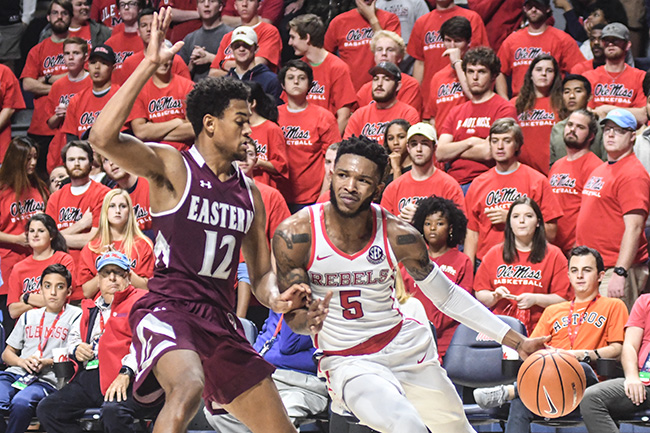 Maybe this is what Ole Miss’ men’s basketball team is this season.

The Rebels can score with the best of them, ranking fifth in the Southeastern Conference and among the top 50 teams nationally at more than 82 points per game. But Ole Miss hasn’t had any other choice but to pour in the points in order to keep up.

Ole Miss (7-5) has the second-worst record in the SEC as it heads into league play because it’s been a struggle all season for the Rebels to stop anybody from scoring. Ole Miss is 270th out of 351 Division I teams in points allowed (76.6 per game) and 283rd in 3-point field-goal percentage defense (37.2 percent). The Rebels also aren’t creating many more possessions for themselves, ranking 204th in turnovers forced (13.58 per game).

So despite their offensive production, the Rebels enter Sunday’s SEC opener against South Carolina with no real NCAA Tournament resume. There’s one last non-conference opportunity at Texas (No. 48 in the NCAA’s latest RPI rankings) in the SEC-Big 12 Challenge coming in late January, but the Rebels are 0-4 against the only RPI top-100 teams they’ve faced so far with two of those setbacks coming as part of those three overtime losses Ole Miss has suffered at home.

It leaves the Rebels, who begin league play with an RPI of 185, with a lot of work to do and little room for error in the SEC if they’re serious about turning their season around and joining the NCAA Tournament conversation two months from now.

South Carolina isn’t the Final Four-caliber team it was last year with Duane Notice and reigning SEC Player of the Year Sindarius Thornwell no longer on the roster, but the Gamecocks will be a formidable first test for Ole Miss in the league. More importantly, it’s the first opportunity in a much-improved SEC the Rebels will need to capitalize on in their own building.

South Carolina has an RPI of 40, one of nine SEC teams with a top-50 RPI. Eleven teams in the league are inside the top 100. Teams’ RPIs will fluctuate throughout the season depending on wins and losses, but the first four games on Ole Miss’ conference slate — trips to Georgia and Auburn are sandwiched around a home game against Mississippi State after Sunday — are against teams in the top 75. Ole Miss isn’t scheduled to play a team outside the top 100 until the Rebels travel to LSU on Feb. 10.

Ole Miss will travel to take on the SEC’s highest-ranked team in Texas A&M (6 RPI) on Jan. 16 before heading to Arkansas (13) four days later, the kind of road wins that, should Ole Miss pull them off, would resonate. The Rebels also get the Razorbacks, Tennessee (8), Missouri (18), Auburn (25) and Mississippi State (76) twice in league play.

In other words, there are plenty of quality chances still left for Ole Miss. But the Rebels have to start taking advantage of them while simultaneously avoiding those ugly sub-100 RPI losses, something they’ve managed to do so far.

Exactly what Ole Miss’ record within the league needs to be to make a push for an NCAA at-large bid will depend on who the wins and losses come against, but it’s safe to say being average isn’t going to cut it. A 10-8 SEC record would put the Rebels at 17 or 18 wins depending on the outcome of the Texas game, which won’t be enough. Ole Miss likely needs to be 12-6 or better in the SEC given that could give the Rebels at least 20 wins (again, depending on what happens against Texas) heading into the SEC Tournament.

In order to do that, the Rebels will need leading scorer Terence Davis to stay out of lingering foul trouble and on the floor as long as possible each night. Ole Miss has more scoring options this season, but the Rebels largely go as Davis goes.

They’ll need to start showing a pulse on the defensive end of the floor. Davis, Deandre Burnett, Markel Crawford, Devontae Shuler and Breein Tyree have to keep the ball in front of them on the perimeter more consistently while 7-footer Dominik Olejniczak needs to provide the consistent resistance at the rim that Andy Kennedy talked so much about before the season began.

Of course, playing defense starts with wanting to play defense, and Kennedy has lamented his team’s effort and awareness on that end of the court all season. That’s never a good sign, but the Rebels have recently showed signs of improvement, holding Texas A&M-Corpus Christi and Bradley to 63 and 59 points, respectively, in their last two games — two of the three lowest point totals for any of Ole Miss’ opponents this season.

There’s still time for Ole Miss to change the narrative of its season, but the Rebels’ work so far has left their margin for error razor thin as they try to do just that.