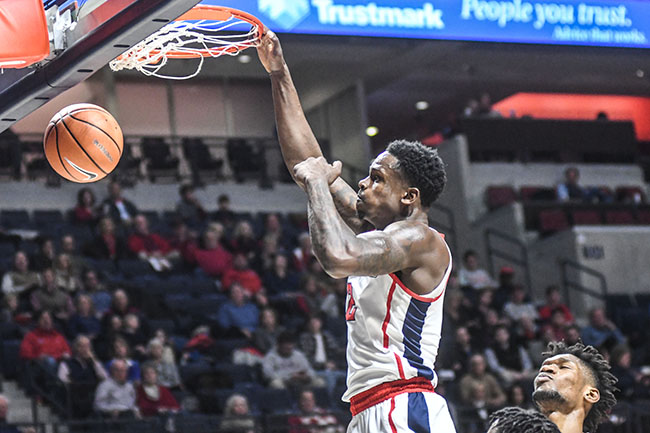 During three overtime losses at home earlier this season, Ole Miss coach Andy Kennedy could only look on as his team failed to make the kind of plays down the stretch that could’ve resulted in a different outcome.

On Sunday, Kennedy watched the Rebels come up with those difference-making plays that helped Ole Miss pull off its best win so far.

Ole Miss got 18 points from Deandre Burnett, 17 from Markel Crawford and just enough of those winning plays to hold off South Carolina for a 74-69 win in both teams’ Southeastern Conference opener at The Pavilion. Bruce Stevens added 10 points for the Rebels, who picked up their first RPI top-50 victory with their third straight win.

“I have a pretty clear understanding to our path to success,” Kennedy said. “It’s not a huge road, but there is a path. That’s going to take a blue-collar approach, and I think our guys are starting to figure it out.

“You’ve got to make SEC plays. I thought we made some SEC plays in the second half to give ourselves a chance.”

South Carolina’s Chris Silva had a game-high 21 points and 13 rebounds as the Gamecocks (9-4, 0-1 SEC) held the advantage inside, outrebounding Ole Miss 43-30 and finishing plus-9 in second-chance points (11-2). Frank Booker also had 21 points for Carolina while Ole Miss (8-5, 1-0) didn’t get much production from leading scorer Terence Davis, who finished with just four points, five rebounds and three turnovers in 19 minutes before fouling out with 2:22 left.

But Crawford and Burnett helped pick up the slack. Burnett started 1 of 7 from the field but scored 15 of his points in the second half, including back-to-back 3-pointers as part of a 10-3 run that gave the Rebels their largest lead at 61-55 with 6:23 remaining.

Ole Miss clung to a 66-63 lead with 1:32 left when Crawford stole an inbounds pass under Carolina’s basket and knocked down two free throws after being fouled to stretch the lead back to two possessions. The Gamecocks got within one possession three more times the rest of the way, but Ole Miss answered with a pair of free throws each time, including two from Burnett with 11 seconds left, to salt away a win over a Carolina team that lost reigning SEC Player of the Year Sindarius Thornwell off last year’s Final Four team but came into the game with an RPI of 36.

“We know what type of team (South Carolina coach) Frank Martin coaches and know how hard they play,” Crawford said. “For us, we’re just coming out with the sense of urgency knowing those winning plays will help us in the long run.”

Burnett went 9 of 14 from the free-throw line as Ole Miss shot nearly 79 percent from the charity stripe. The Rebels made 20 of their last 23 freebies, helping themselves avoid a repeat of losses to South Dakota State, Virginia Tech and Illinois State that came by a combined nine points.

“It’s been tough,” Crawford said. “We’ve lost two or three games in overtime here, and for us to start off SEC play with a big win down to the wire just shows the hard work we put in and just the emphasis of closing big games and getting big stops down the stretch.”

Crawford’s 11 first-half points helped the Rebels overcome a nine-point deficit and take a 31-30 lead at the break despite committing 13 fouls to Carolina’s seven in the first 20 minutes and Davis playing just five of those minutes because of foul trouble. A more engaged defense from Ole Miss held the Gamecocks without a field goal for more than 7 minutes at one point in the first half, allowing the Rebels to erase the deficit and settle in to a back-and-forth contest that saw eight ties and 11 lead changes.

Ole Miss limited the Gamecocks to 37.9-percent shooting from the floor, including just 35.7 percent in the first half. It’s the third straight game the Rebels, who began the week 270th out of 351 Division teams in points allowed, have yielded less than 70 points.

“I think our ball-screen (defense) has gotten better at the point of attack,” said Kennedy, who added he’s also seen an improvement in communication on that end of the floor. “Our bigs are now higher and we’re not allowing those guards to get downhill and forcing us rotate.”

With no top-100 RPI wins in the non-conference portion of the schedule, there’s still a long way to go for an Ole Miss team trying to piece together a viable postseason resume. But Sunday was a start as the Rebels try to match their longest winning streak of the season Wednesday at Georgia (5:30 p.m., SEC Network).

“You only get one opportunity really all season to hit the reset button, and tonight was the night. We’re 1-0 in our mind,” Kennedy said. “It was good for our spirit. We know we didn’t play great basketball, but we played well enough to get an SEC win. That does wonders for the psyche. It’ll put a bounce in our step the next two days as we prepare to go to Athens.”