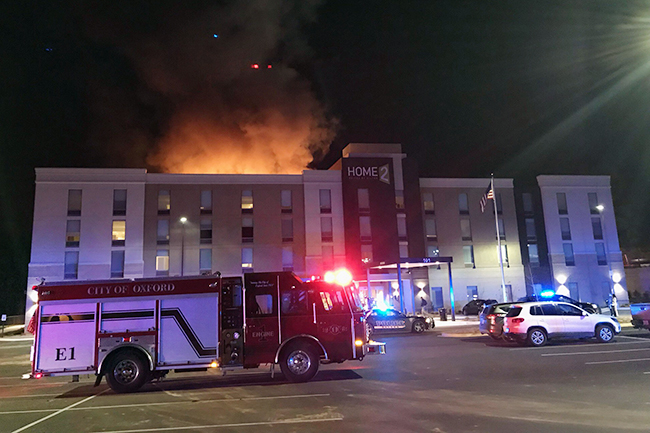 LANCE TUSCANY Flames shoot from the roof of Home2 Suites by Hilton in Oxford, Miss. on Tuesday, January 2, 2018. According to firemen the fire started in an air conditioning unit on the roof.

An air conditioning unit caught fire on the roof of the recently opened Home2 Suites hotel on South Lamar Boulevard.

The blaze started a little after 5 a.m., with Oxford Fire Department responding at 5:16 a.m. There were 14 rooms occupied in the hotel at the time, three of which were on the top floor.

“There are several units that handle the rooms that are electric and one gas unit that feeds the corridors,” Oxford Fire Chief Mark Heath said. “The fire caused extensive damage to the units.”

There were no injuries reported among guests, but one firefighter suffered a minor injury to his back while fighting the fire. According to OFD, hotel management is required to find alternate accommodations for guests.

“I was on the first floor, so I grabbed everything I could and ran out,” Lance Tuscany, a guest from Chicago, said. “When the manager was here, he said something about them owning another hotel for us to stay at.”

Battalion Chief Jimmy Dickinson and his crew were the first to respond, with OPD responding soon after to help with evacuations.

“When we arrived, there was fire and smoke showing from the rooftop,” Dickinson said.

“The air conditioning unit, which is roughly the size of [a pickup truck], caught fire, which ran through some of the ductwork and caught some of the roof on fire as well.”

Richard Coad, of Atlanta, Ga., was staying in a room on the top floor of the hotel with his wife and their dog, and says emergency procedures “worked the way they’re supposed to.”

“The alarm went off and then it stopped,” Coad said. “I looked in the hallway and the lights were still flashing, so I told my wife we had to get out. Two minutes later, police were banging on the door and we grabbed the dog and some jackets and left the building.”

While fire damage was contained to the roof and air conditioning and heating systems, the interior of the hotel suffered significant water damage down to the lobby level. In the 12 degree temperatures this morning, the water turned to ice on the rooftop and sidewalk outside the building.

Luke Chamblee, president of LRC2 Properties, released the following statement: “There was a small fire on the roof early this morning. No one was hurt, and the fire was put out quickly. We are working diligently to get things back in order and make sure the building is completely safe for our guests and employees. We couldn’t be more appreciative of the responsiveness and professionalism of the Oxford Fire Department.”