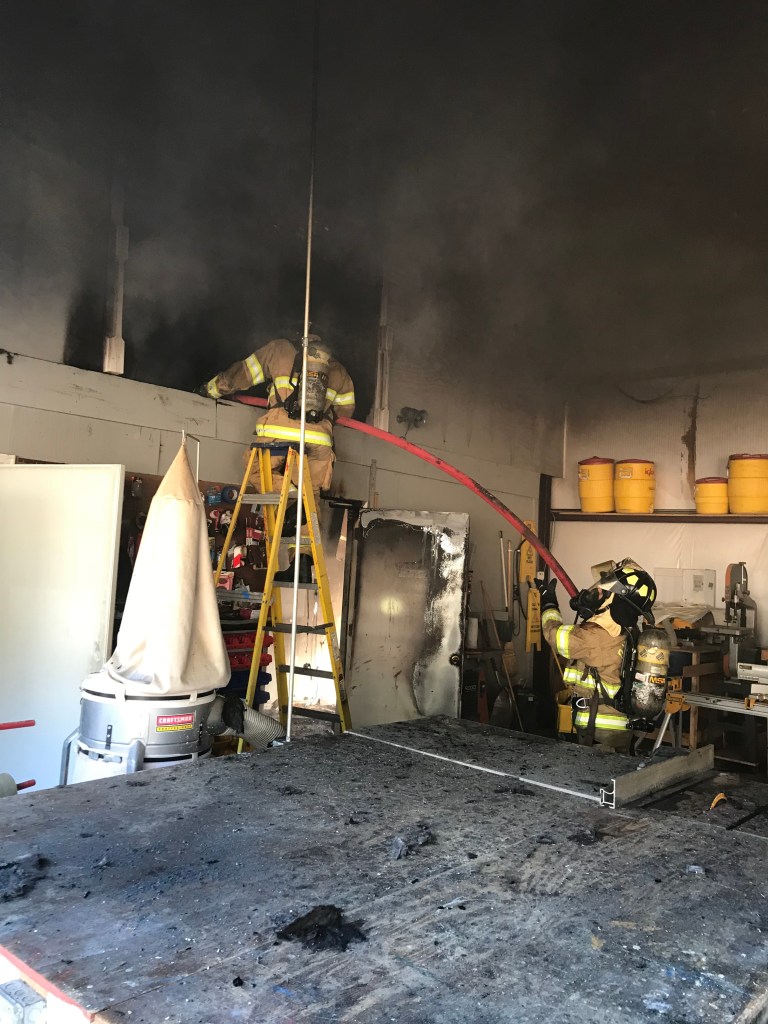 Oxford firefighters put out a fire at the Oxford Building and Grounds facility on McElroy Drive Sunday. OFD officials say the fire appeared to have started from a stove burner being left on. The Building and Grounds Department will operate out of City Hall until repairs are complete.

At about 10:23 a.m. Sunday, a battalion chief at the main fire station on McElroy Drive noticed smoke coming from what later turned out to be the Building and Grounds building. Moments later, a call came into 911 about the smell of smoke in the same area and OFD responded.

“We went down there and pulled two hose lines and did an aggressive interior attack to control and knock down the fire,” said OFD Chief Mark Heath.

The fire caused heavy damage to the kitchen and common area.

The fire and smoke damaged about 25 percent of the building, Heath said.

The fire appears to have started from either a burner being left on the stove after cooking or someone bumping up against it and turning it on accidentally.

“Cooking is the cause of the majority of fires (in the South),” he said. “Unfortunately, we make a few of these incidents each year here in Oxford and this time of year is especially important as some individuals choose to use stoves as a source or ovens of heating in some cases.”

Heath said floor and space heaters are also a concern this time of year, as they are often left unattended. The Oxford Fire Department discourages this practice as well as the use of candles, due to the increased opportunity for an accidental fire.

“This particular incident is a reminder to all of us, even personnel trained in fire safety, of the need to double check to ensure stovetops cooking surfaces, ovens, coffee makers and portable floor heaters are completely turned off after use and nearby areas are clear of any loose materials, such as paper products, bedding or other combustible materials,” Heath said.

The Building and Grounds Department will operate out of City Hall until the damage is repaired.

Heath said due to Oxford’s strict building codes, the number of actual fires inside the city has decreased over the years; however, Sunday’s fire was the first of two active fires OFD responded to in a two-day period.

On Tuesday morning, firefighters battled a fire on the roof of Home2Suites off South Lamar Boulevard that just opened in Oxford. The fire appears to have started in or near the heating, ventilation and air conditioning – or HVAC unit, however, the exact origin and cause of the fire are still being investigated.

Oxford rings in new year with no fatal wrecks,…