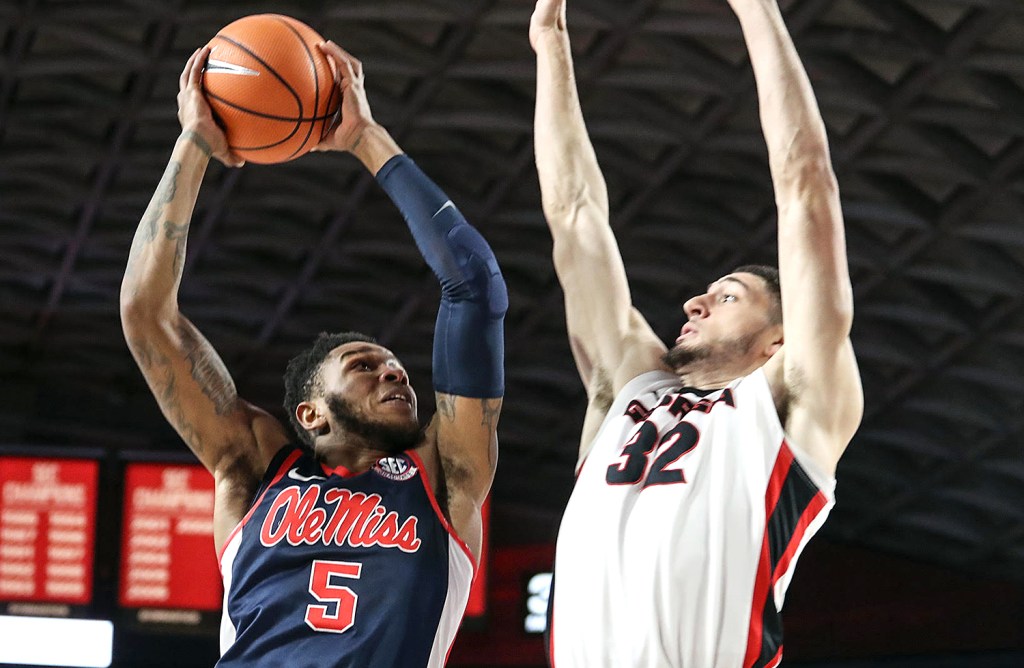 Ole Miss didn’t shoot well enough to overcome Georgia’s dominance on the interior as the Rebels fell 71-60 at Stegeman Coliseum on Wednesday. The loss snapped the Rebels’ three-game winning streak.

Breein Tyree led Ole Miss (8-6, 1-1 SEC) with 17 points, but freshman Devontae Shuler was the only other Rebel in double figures with 11 points. Ole Miss, which was held to its second-lowest point total of the season, shot just 36 percent from the field and made just six of its 26 3-pointers.

It was another largely ineffective night for Terence Davis, who finished with just four points on 2-of-11 shooting and three rebounds in 20 minutes off the bench. Davis, who leads the Rebels in scoring at more than 15 points per game, has scored eight points in Ole Miss’ first two SEC games.

Georgia (10-3, 1-1) trailed just once and extended its lead to as many as 16 in the second half, doing most of its damage with a potent inside-out attack from its bigs. Forward Juwan Parker made all four of his 3s on his way to his first career double-double (game-high 18 points and 11 rebounds) while Yante Maten, the SEC’s second-leading scorer, had 15 points and seven boards. Fellow forward Derek Ogbeide added 14 points and eight rebounds for the Bulldogs.

Jordan Harris added 12 points on 5-of-6 shooting for the Bulldogs, who improved to 7-0 at home. Markel Crawford had nine points and six rebounds for Ole Miss while Dominik Olejniczak pulled down a team-high seven boards with the Rebels finishing plus-1 (42-41) on the glass, but their poor shooting didn’t give them much of a chance to notch an RPI top-100 win away from home.

Ole Miss will return to The Pavilion on Saturday to take on rival Mississippi State. Tip is set for 3:30 p.m.

Ole Miss’ next opportunity comes from No. 4 South…