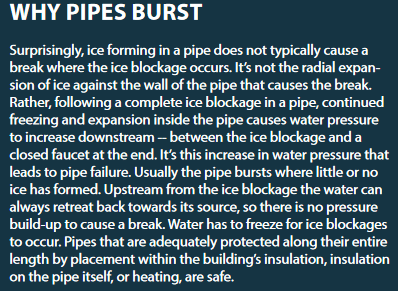 As temperatures barely reached above freezing Tuesday and Wednesday, pipes began bursting all over Oxford after lows and wind chills fell below 10 degrees for several nights in a row.

With the nighttime lows expected to remain below 20 degrees for the next several nights, officials warn that water pipes are still subject to freezing at night and then bursting when the sun comes up and warms things up a bit.

Oxford Public Works Director Bart Robinson said once the temperature falls below freezing and stays that way for an extended period of time, like this past week, it’s time to take precautions against freezing water pipes.

“Heat tapes can be used on exposed pipes or pipes that are prone to freezing,” he said. “If you do have frozen pipes, monitor them once the temps rise above freezing for rupture or burst spots.”

Blocking off the outside air by covering outdoor spigots is a good way to keep the freezing air out of the pipes, Allgood said.

“If your house is well insulated, it shouldn’t be necessary to keep the water running to prevent the pipes from freezing but if not, then it’s a good idea,” he said. “But keeping the cold air out by covering the spigots outside is the best way to prevent that.”

If the pipes freeze wrap pipes in rags. Completely open all faucets and pour hot water over the pipes, starting where they were most exposed to the cold, or where the cold was most likely to penetrate. Learn how to shut off water valves in case a pipe bursts.

“We’ve had 70-plus calls from individuals concerning frozen pipes on private property (this week),” Robinson said.

Burst pipes often set off water flow alarms that are connected to fire alarm systems. The Oxford Fire Department and Lafayette County Fire Department are generally dispatched to these calls since the exact reason for the alarm activated can’t be determined until a firefighter is on scene.

“We’ve responded to three general fire alarms and 20 water flow alarms since 7 a.m. Monday,” said Oxford Fire Chief Mark Heath said Wednesday. “The situation with freezing pipes resulting in burst water pipes is far from over. Based on weather conditions through to this weekend, we will probably receive numerous additional calls for this type of response.”

Heath warns homeowners against using portable gas torches or other devices that could transfer heat to building materials and create a fire danger.

“Unfortunately, burst pipes usually result in some type of water damage, and can only be minimized by shutting the water off or ensuring the previous precautions are followed,” Heath said.

“If you have elderly neighbors or family members who have special needs or have a hard time getting around, check with them to make sure they have everything they need to stay warm,” he said. Also, if your pets must remain outside during the cold weather, make sure they have some type of protected shelter and good bedding material, such as hay, straw, or a heavy duty pet bed, and place the shelter in a location where it is  protected from the wind. Check their food and water bowels to make sure they aren’t frozen.”

If the cold temperatures become extreme, Allgood suggests bringing outdoor pets inside for the night.

“Make a safe space in the home for  the pet, such a laundry or storage room, as a temporary shelter,” he said. “Make sure the safe space has some familiar items such as toys, food/water bowels, bedding, et cetera so the pet is not stressed in the new unfamiliar environment.”