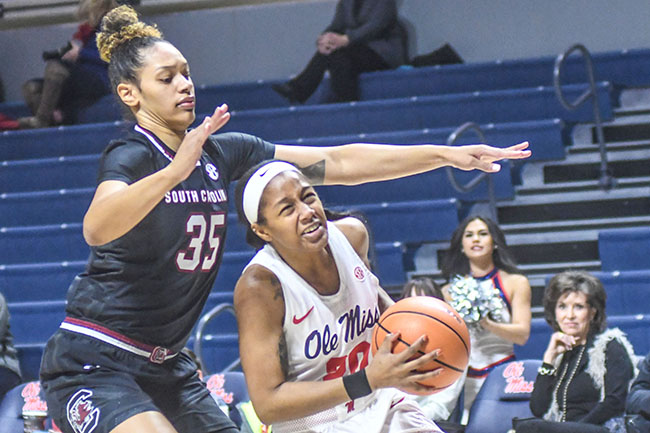 Ole Miss looked like they may pull an upset on the defending national champions through the first three quarters.

Unfortunately basketball is a four-quarter game.

No. 4 South Carolina used a 29-12 fourth quarter run to hand the Rebels their second straight loss with an 88-62 win on Thursday night inside the Pavilion.

A’ja Wilson scored 25 points and pulled down 15 rebounds to lead the Gamecocks.

“I thought for three quarters we did a good job,” Ole Miss head coach Matt Insell said. “Got within nine there and (South Carolina) made three straight 3s to start the fourth quarter just deflated us.”

Insell had a strategy in the first half of trying to lure Wilson out of her comfort zone by having Gibson attempt multiple shots from outside the perimeter. Gibson shot 3 of 11 from 3-point range in an attempt to get Wilson and other Gamecocks to get away from the post.

South Carolina did not take the bait.

“(Gibson) shoots the ball well in practice and we were trying to get Wilson out of the paint,” Insell said. “Wilson just hangs out in there, and if you don’t force her out, you’re not going to score in there.”

After trailing by as many as 19 points in the third quarter, the Rebels rallied to cut it down to nine points to start the fourth quarter. The offense went cold as Ole Miss shot 4 of 13 in the final eight minutes, allowing the Gamecocks to pull ahead and put the game away.

“I felt we defended and rebounded,” South Carolina head coach Dawn Staley said of the late run. “We were contesting shots and we stopped fouling. We fouled them a lot at the end of that third quarter. We were able to put just a little more pressure on them to where we could affect the shot.”

Ole Miss has lost four of their last five games dating back to the Oregon loss on Dec. 19. They will look to end the skid on Sunday when they host Florida (8-7, 0-2) at 2 p.m. before traveling to No. 5 Mississippi State next Thursday.