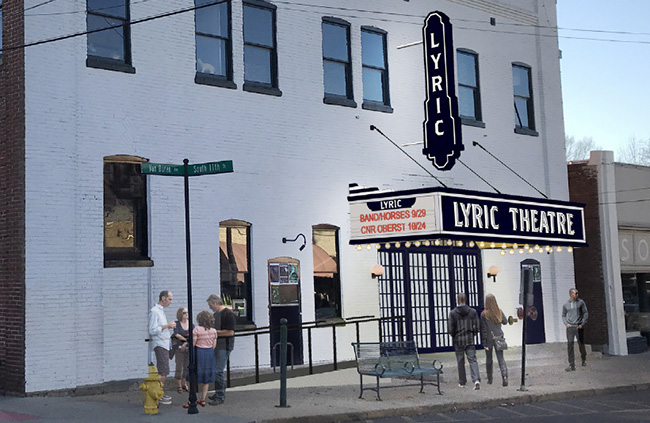 With its 10-year anniversary coming up later this year, The Lyric Oxford will be doing renovations to the building that will greatly mimic how the theater looked in its early days.

On Thursday, the Courthouse Square Historic Preservation Commission approved the Certificate of Appropriateness for the future renovations.

Most of the changes on the exterior of the building are planned for the facade, and include adding a vertical blade sign, navy blue with white letters and a marquee sign modeled after the one that was on the building in the 1940s.

The marquee signs would say Lyric Theatre with white letters on a navy blue background. The sides of the marquee would have back-lit white panels with changeable, red slotted letter, reminiscent of the early theater signs. Underneath, would have exposed vintage-styled LED globe light bulbs like the original Lyric sign had as shown in photographs presented by architect Bruce Lanier during the meeting.

Plans also call for adding an ADA accessible concrete ramp and handrail on the front of the building.

“That will allow for people to use the cocktail bar while there’s another event going on in the main theater area,” Lanier said.

Plans for the ally on the west side of the building include adding a transparent polycarbonate awning to allow light into the ally but provide coverage in case of rain.

The building was first constructed in the late 1800s and was originally a livery stable owned by William Faulkner’s family in the early part of the 20th century, according to the Lyric’s website. During the 1920s, it was converted into a theater for live performances and silent films. The Lyric was the first motion picture theater in Oxford. The Lyric stopped operating as a theater in the 1970s and sat vacant until the early 1980s when it was turned into office spaces and a health center.

The Lyric was purchased by Bradley Bishop in 2007 and reopened as a theater in 2008, featuring both live performances and the occasional movie. It also serves as a popular event venue.

Lanier said the renovations will be done in phases as to not interrupt events planned at the Lyric during the year, but said the owner would like to have everything completed by the Lyric’s anniversary in the fall.

In other business Thursday, the commission:

• Approved the COA for a hanging sign and a wall plaque for End of All Music that is relocating from North Lamar Boulevard to the Square.

• Approved the COA for a new hanging sign and two decals for Regions Bank.

• Approved a request to remove the porte-cochère (covered parking area) at The Edgar on North Lamar.