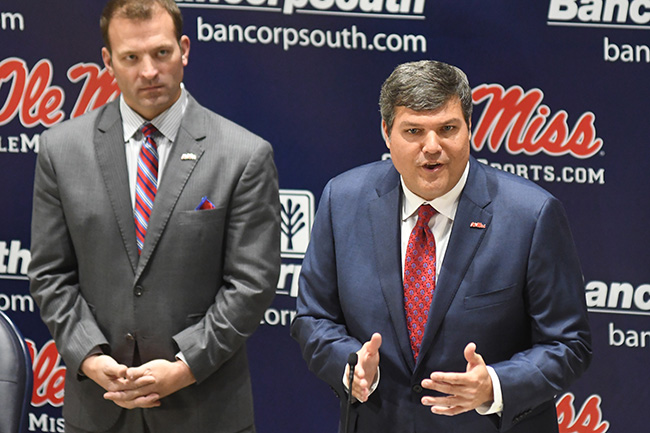 Early in December, Ole Miss sent notices to its donors informing them that the tax break they usually get on annual donations made toward priority seating at athletic events was likely going away, urging them to contribute before the end of the year if they still wanted the deduction.

The school wanted to be proactive just in case.

“Probably about six months,” Ole Miss Athletics Foundation Executive Director Keith Carter said of how long the foundation has been preparing for the Republicans’ tax overhaul. “We’ve known it’s been on the table for a while.”

It’s the Tax Cuts and Jobs Act, and Ole Miss is among the schools nationwide that will soon feel the effects of a new tax bill that will have a significant financial impact on college sports.

The bill passed through the House and the Senate last month — and since signed by President Donald Trump — contains two actions that will squeeze college athletic departments: the elimination of the tax deduction of donations toward priority seating that boosters have enjoyed for years and a tax on the compensation of a non-profit organization’s highest-paid employees. For Power Five schools, many coaches in revenue sports fall into that category.

“It’s a big topic in college athletics,” Ole Miss athletic director Ross Bjork said. “We’re gathering more information from tax attorneys and consultants, so it’s a big deal. Everyone is paying attention to it, and it’s a new world for sure.”

Before the passage of the bill, which went into effect Jan. 1, boosters could deduct 80 percent of their annual donations for priority seating from their federal taxes. Most schools, including Ole Miss, require donations of a certain amount for season tickets in certain sections.

Eliminating the deduction is expected to generate $200 million a year, according to estimates released last month by the House Ways and Means Committee. Schools have long used the deduction as incentive for donors.

“So far, we haven’t had anybody say, ‘I’m dropping,’ or anything like that because of (the elimination of the deduction),” Bjork said. “But I think that’s to be determined based on each individual’s situation.”

Priority seating at men’s basketball games ranges from donations of $75 (first four rows of the mezzanine level) to $2,500 (floor seats) while priority seats at home baseball games require contributions ranging from $125 to $2,000 (Dugout Club). A $50 donation also makes donors eligible to purchase two tickets for football road games and bowl games and two postseason basketball and baseball tickets. Donors can buy four of each with a donation of $1,250.

Approximately 18 percent of the athletic department’s annual budget is funded through private donations, including those for priority seating, according to the school. Carter said nearly 19,000 donors last year — a slight dip from the record 19,380 donors in 2016 — helped the foundation reach nearly $30 million in donations.

Whether that figure can be matched or surpassed this year remains to be seen, but Carter said “a lot” of donors heeded the school’s warning and made payments for priority seating for 2018 and beyond before the end of last year.

“(The final week of December), we were really busy with people who had kind of jumped on this thing early and realized that this is what was going to happen if the bill was signed, which it was just before Christmas,” Carter said. “They decided to go ahead, be proactive and pay some of those donations early.”

With the bill now in effect, Bjork said the school is in communication with consultants, tax attorneys and other experts about the possibility of restructuring the priority seating program if it means finding other ways to give donors tax deductions.

“We don’t know what that looks like yet, but we’re talking to a lot of people to see if there’s some options there,” Bjork said. “If there’s a way to carve out a certain exemption or exception, then we’re going to look to do that to try to give our donors the most advantages possible.”

The major hit for athletic departments will come in the form of a 21-percent excise tax added to the part of the base salary for the school’s five highest-paid employees that exceeds $1 million. Football coach Matt Luke, who was recently hired as the permanent coach after serving this past season on an interim basis, will be Ole Miss’ highest-paid employee this year at $3 million. Defensive coordinator Wesley McGriff, who will make $1.1 million next season, and men’s basketball coach Andy Kennedy ($2,050,000) also have salaries exceeding $1 million.

That will put the school on the hook for at least $661,500 this year on top of those salaries, Bjork said. The legislation also calls for the tax to be assessed to “parachute payments,” or separation payments such as buyouts.

“This is going to cost (schools) hundreds of millions of dollars a year,” Tom McMillen, a former congressman who serves as chief operating officer of the LEAD1 Association, which represents FBS athletic directors, told USA Today last month.

Whereas some schools may have to request more funds from donors or dip into the budgets of non-revenue sports in order to mitigate the extra cost, Bjork said Ole Miss is in line to make enough of a profit with its current athletic budget, which runs from July 1-June 30, that the department will be able to cover it through existing revenue streams. The athletic department’s budget is approximately $112.5 million.

“Now that profit margin shrinks a little bit because you have this added expense,” Bjork said.

Bjork said the tax gives athletic directors plenty to think about when deciding which coaches to hire, who to fire and how their contracts will be structured in the future, including the possibility of more deferred payments.

“You have to contemplate what are you willing to pay coaches knowing that this 21 percent is there,” Bjork said. “Then you look at somebody that maybe you have to terminate and you look at buyouts. It would be added on to any buyout amounts. It definitely complicates it. It definitely adds another layer that you have to factor in to your financing plan.

“We’ve planning for it. We’ve been preparing our budgets for it. Obviously we’ll handle it.”