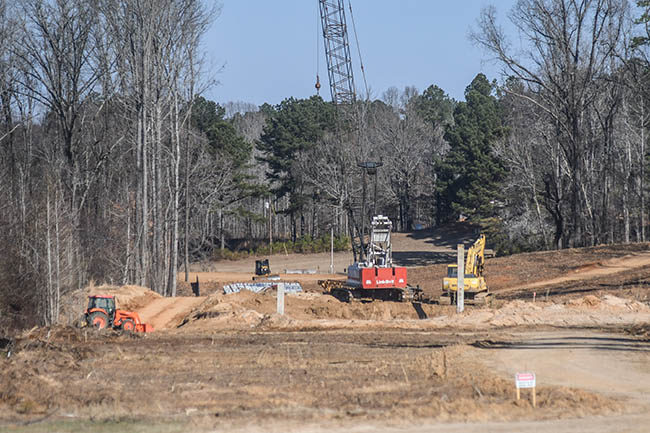 Construction is underway on West Oxford Loop, in Oxford, Miss. on Saturday, January 6, 2018.

In March 2017, the U.S. Census Bureau released its annual population estimates, and for the seventh-straight year, Lafayette County saw an increase in residents.

The 2016 numbers showed a 13.61 percent increase, on par the 2010 U.S. Census that named the county as the fastest-growing county in Mississippi and one of the top 100 fastest-growing in the country.

More people residing in Lafayette County means more cards on roads, but while the population has expanded, funding options to build new roads and maintain current ones has not.

“The growth is putting a strain on some of the roads in high growth areas,” said Lafayette County Engineer Larry Britt. “As the traffic count increases it causes the maintenance and upkeep to increase.”

The Lafayette County Board of Supervisors is looking at creative ways to help fund future roads. Sometimes, it involves just asking a neighbor for help.

The county has partnered with the City of Oxford for the construction of two new roads, West Oxford Loop and Sisk Avenue extended. The two entities are splitting the costs of the projects after agreeing that the additional roads would benefit all Lafayette County residents, in and outside of the Oxford city limits.

However, Oxford and Lafayette County are facing restraints on state and federal help for roads just like the rest of Mississippi.

“Since the state funding has been cut, the county has had to increase their Road and Bridge Funds just for the everyday maintenance,” Britt said.

Lafayette County budgets about $1.2 million a year on asphalt for the maintenance of existing roads, with each district getting about $200,000 worth of new paving and street repair.

The sale of the old Baptist Memorial Hospital-North Mississippi site in 2012 created a $20 million trust fund that produces about $500,000 a year in interest. Those funds are added to the road-maintenance pot, allowing each district to receive about $300,000 in road maintenance this year.

Outside help for roads is still available, but with state budget cuts there is now more competition for grants.

Britt said the program had been used often in Lafayette County to help repair, rehabilitate and replace deficient bridges that don’t fall under the requirements for the State Aid Program.

Lafayette County has the fourth-lowest general county millage rate in the state. Supervisors have resisted raising taxes in recent years to help pay for new roads or maintaining existing roads and are continuing to look at other funding mechanisms before having to vote for an increase in taxes.

“The county is always looking for federal and state grant programs that can help offset the cuts at the State Aid level,” Britt said.

Board of Supervisors approve Briarwood subdivision