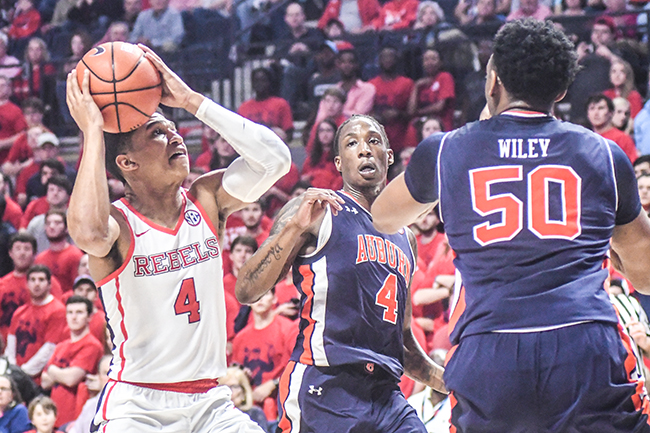 Ole Miss’ Breein Tyree (4) drives the lane against Auburn at the Pavilion at Ole Miss, in Oxford, Miss. on Saturday, February 11, 2017. The Rebels have won 10 straight games against Auburn. (Bruce Newman, Oxford Eagle via AP)

Ole Miss hasn’t lost to Auburn in men’s basketball since the end of Barack Obama’s first term as president of the United States. But none of those wins have come over an Auburn team that’s been ranked.

A win tonight would change that.

Ole Miss will try to keep its recent domination of Auburn going at Auburn Arena against the 22nd-ranked Tigers, who are putting together their best season in years. The Rebels (9-6, 2-1 SEC) have won 10 straight over Auburn dating back to February 2012 and 13 of the teams’ last 15 meetings, including a sweep of the Tigers last season.

But Auburn (14-1, 2-0) comes into tonight’s matchup (8 p.m., ESPNU) as one of the nation’s hotter teams in coach Bruce Pearl’s fourth season at the helm, having won 12 in a row. The Tigers’ most recent victories came on the road against then-No. 23 Tennessee and then-No. 22 Arkansas on Saturday at home, wins that vaulted Auburn into the rankings for the first time since 2003 — the same year the Tigers last made the NCAA Tournament.

Even without forward Danjel Purifoy and center Austin Wiley, who haven’t played all season amid eligibility concerns stemming from their alleged connection to former assistant coach Chuck Person in the FBI’s college basketball probe, Auburn is second in the SEC in scoring (87.3 points per game) with guards Mustapha Heron (15.9 points per game) and Bryce Brown (15.7) leading the way. The Tigers lead the league in scoring margin (plus-14.3), blocks per game (6.4) behind SEC blocks leader Anfernee McLemore (3.2 per game) and free-throw percentage (77.8).

Point guard Jared Harper (12.7 points per game) facilitates an offense for the Tigers that likes to get out and run with their smaller, quicker lineup.

“I think they’re by far the most explosive offensive team we’ve played thus far in our SEC schedule,” Ole Miss coach Andy Kennedy said. “No disrespect to our first three opponents, but they’ve been really, really explosive with their ability to stretch the floor really at all five positions. They have unconventional lineups as it relates to size and skill level at different spots.”

Ole Miss will have to make its fair share of shots to keep up with the Tigers’ frenetic pace, something that’s been a struggle of late. The Rebels, fresh off a 64-58 win over Mississippi State, are shooting an SEC-worst 36.5 percent from the field in league play and are a combined 13 of 54 (24 percent) from 3-point range in their last two games.

The numbers are low in part because of the continued struggles of Terence Davis, who has combined for just 10 points through the Rebels’ first three SEC games after going 1 of 13 from the field against Mississippi State. He’s just 4 of 28 from the floor in league play, including 0 of 16 from beyond the arc.

The Rebels have gotten boosts from Deandre Burnett, who matched a season-high with 21 points against Mississippi State, and point guard Breein Tyree, who’s averaging 16.5 points the last two games. It’s the kind of production they’ll need against an Auburn team that comes in with an RPI of 13, giving Ole Miss another chance to enhance its postseason resume.