Oxford girls clinch 1-6A title with OT win over Tupelo 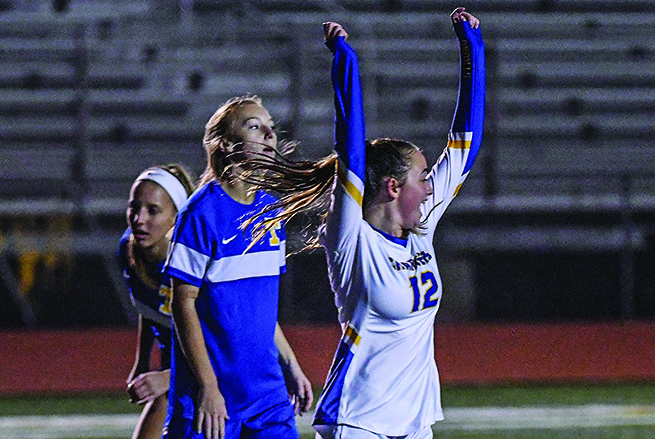 The road to a third consecutive state championship got a little easier for the Oxford girls soccer team.

The Lady Chargers defeated Tupelo 4-3 in overtime to clinch the Region 1-6A title on Tuesday night at Bobby Holcomb field.

The win capped a season sweep of the Golden Wave after a 4-1 win at Tupelo on Dec. 7. The only way Oxford would not have clinched the region title was if Tupelo won by four or more goals on Tuesday.

It also secured home field advantage for at least the first round of the MHSAA Class 6A state playoffs that begin on Jan. 30.

“Excited to get (the region title) early and just kind of take a deep breath,” Oxford coach Hunter Crane said. “It came off good rhythm passing which was something we were stressing all week and last week.”

Each team’s goalkeeper was tested early in the match, including Oxford’s Anna Kate Trost who blocked a hard shot in the third minute of play to keep things scoreless.

Two minutes later the Lady Chargers would strike first with a goal from Addison Mills for the early 1-0 lead.

The one-goal lead held for most of the first half until Tupelo’s Anna Fleming Quaka found the back of the net in the 34th minute, sending the match to halftime tied 1-all.

Tupelo (5-4-1, 1-2) grabbed the lead midway through the second half off a goal from Sydney Hughes, the Golden Wave’s leading scorer, in the 54th minute.

“We knew that they wanted to give (Hughes) the ball and just kind of do some things with her,” Crane said. “She’s their go-to. She’s a quality player.”

The goal advantage was short-lived as Grace Joyce scored in the 62nd minute to knot things back up. It would remain that score through the rest of regulation.

In overtime Morgan O’Conner scored her first goal of the match four minutes in and Katelyn Rock added another late in the second ten-minute overtime period for the winning margin.

“Tupelo’s got some matches under their belt now and got a little bit of rhythm going,” Crane said. “We expected a fight like that tonight. We didn’t expect them to kind of lay over and just give it to us. So, we appreciated the fight.”

Boys falter in second half
When Oxford and Tupelo met on Dec. 7 at Tupelo High School the Golden Wave came away with a 2-1 win, putting them in control of the region title.

The Chargers stilled controlled their own destiny and could have taken over the region lead if they won by two or more goals on Tuesday night.

Everything was going according to plan, grabbing that two-goal lead in the first half but a second half surge by Tupelo ended any hopes as the Chargers lost 3-2.

“We’ve got to get more consistent,” Oxford coach Charles Sabatier said. “We played a great first half and the second half we didn’t want it as bad as they did.”

It gave Tupelo the season sweep and firm control of 1-6A.

Keaton Calhoon gave Oxford (11-4-2, 2-2) the lead quickly with a goal in the first two minutes of the match.

The senior added another goal late in the first half for that two-goal cushion. It was a record breaking goal as Calhoon set a new mark of goals scored in a season at 27.

Tupelo’s Clayton O’Daniel punched a goal in late in the first half to make it a 2-1 Charger lead at halftime.

O’Daniel added another goal and Jalin Boyd also scored to give the Golden Wave the win.

The Chargers will need to win their final two region matches against South Panola and Columbus to secure the No. 2 seed out of the region and advance to the Class 6A playoffs.

Oxford returns to action on Friday when they go to Lafayette for a crosstown matchup.