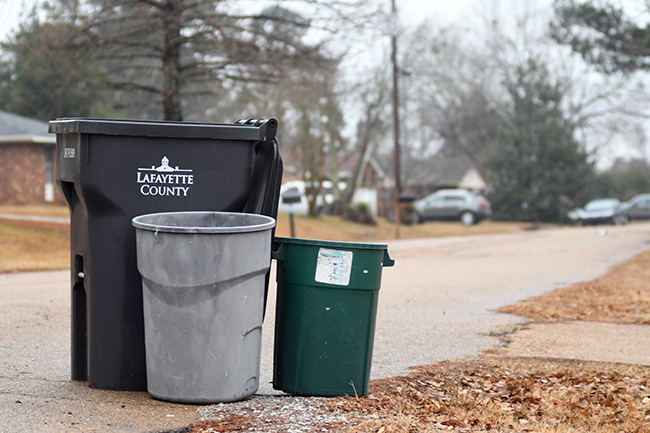 Empty extra garbage cans sit next to an official Lafayette County garbage can in Thacker Heights, in Oxford, Miss. on Tuesday, January 9, 2018.

Having extra trash after the holidays is not unexpected for most households with large boxes and bags of leftover wrapping paper sitting next to the regular bags of trash on garbage pick-up day.

What wasn’t expected by many Lafayette County residents was to find that extra trash still sitting at the end of their drive after the garbage trucks rolled by last week.

In an effort to remove Solid Waste workers from the back of garbage trucks, the Lafayette County Solid Waste Department began a move in May towards using front-loader trucks which have a lever that will grab the can and tip it into the truck. Previously, Solid Waste workers picked up and emptied the 96-gallon cans provided by the county.

In 2015, Kalvin Caldwell, 38, died after the truck he was on turned over and pinned him underneath on County Road 2004.

“We lost a life because of having people hanging onto the back of trucks,” said Lafayette County Supervisor Jeff Busby. “I have to talk to his family after this happened and I don’t want to have to go through that again.”

The goal is to eventually change the system, using only front loader trucks.

When the cans were delivered in May, a note was attached that instructed county residents to use only the provided can for their garbage and that any other containers would not be emptied.

“We were lenient for several months,” Busby said. “We didn’t really enforce that.”

In December, the county put announcements in the EAGLE, on its website, garbage bills and on social media announcing that starting in January, the rules would be strictly enforced moving forward.

Extra cans can be rented at $6 a month.

County resident Susan White said she didn’t receive a notice since she pays her bill quarterly, but wouldn’t have given it much thought since she barely has more than two bags of trash each pick-up day – except Christmas.

“Why would I rent an extra container when we only have extra garbage one time a year?” she said recently. “They picked up our regular container after Christmas and left four bags sitting at on the road.”

Busby admitted Tuesday that it might not have been the best timing.

“We probably should have started a week later,” he said.

After receiving many phone calls, emails and comments on social media, Busby said there are going to be some changes moving forward and that people who have extra trash on holidays won’t be required to rent another can.

“We know there will be extra trash around the holidays,” he said. “We’re going to get all the trash picked up.”

Busby said the Solid Waste Department will start putting hang tags on the garbage cans that aren’t approved county cans, informing households who regularly have more containers on the curb than the 96-gallon can or bags of trash that they will need to rent another can.

“If someone is having a family reunion, they won’t need to buy another can,” Busby said. “They can call us and let us know they’re going to have extra garbage that day and we’ll send an extra truck.”

Busby said there are still workers on the back of trucks but hopes with the addition of another loader truck eventually, that will come to an end.

“We are just trying to make people understand we’re about to start the process we’ve invested in,” he said. “It’s not going to be something that happens overnight. We’re in a learning process. Are there kinks? Yes. Are we going to work through them? Yes. This past holiday season, we learned a few things and we’re making some changes.”

County resident Danny Benjamin said he was told several months ago during a phone call to the Solid Waste Department that he could use a second can for his garbage and was surprised when he found garbage left behind last week.

He called Busby with his complaint Monday and within a couple of hours, the trash left behind was collected.

However, he still doesn’t agree with having to rent a second garbage can.

Benjamin said residents should be allowed to purchase their own additional garbage can, which he said would cost about $47 and is cheaper than paying $6 a month, or $72 a year, or that the county should supply the second can and adjust the rates.

However, Busby said not everyone needs a second can and that raising the rates for everyone to supply every household with a second can wouldn’t be fair to those who never have more trash than what the 96-gallon can hold.