Ole Miss gets big opportunity at No. 4 Mississippi State 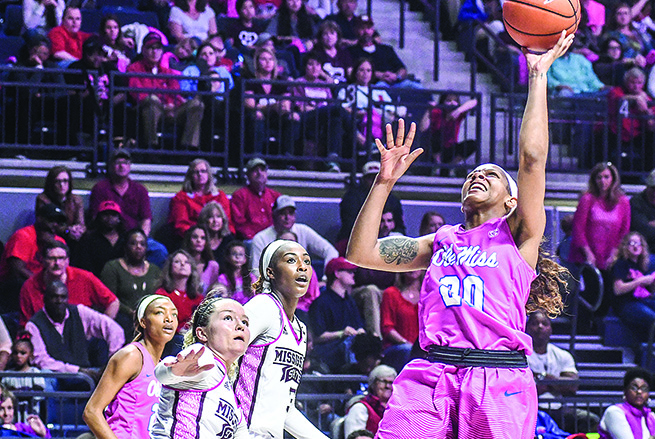 Last Thursday, Ole Miss hosted the defending national champions in South Carolina. One week later, they will play the runners-up.

The Rebels renew their rivalry with Mississippi State tonight when they travel to play the No. 4-ranked Bulldogs at Humphrey Coliseum (8 p.m., SEC Network).

Last season was a magical one for Mississippi State (17-0, 3-0 Southeastern Conference), which defeated UConn in the Final Four and played for a national championship. This is the first matchup between the in-state rivals since that run last March.

Ole Miss coach Matt Insell does not feel it will affect tonight’s game much in level in importance.

“I think it’s no different than all of them,” Insell said. “When you play State, it’s a very intense rivalry game. It’s a game that both teams want to win. It’s a game that both teams kind of throw the records out. … They’ve had a good run. They’ve got a very senior-oriented roster that’s hungry to get back to where they were last year. I think they’re the best team in the league right now.”

Tonight’s game is yet another chance for the Rebels (11-5, 1-2) to steal a win over a top-10 team. It is also the first of two meetings between the teams in a span of 17 days with the Bulldogs visiting the Pavilion on Jan. 28.

Ole Miss will try and parlay the momentum they gained from their double-overtime win over Florida on Sunday for their first conference win into what would be considered one of the biggest upsets of the season to this point.

“It’s not life or death,” Insell said. “It’s not, ‘We’re moving up, moving down in the program.’ When the game is over, win or lose, we got to move forward and be ready to play against a very good Missouri team.”

There are a lot of unknowns for Insell and his team heading into tonight. Before the season began, the fifth-year coach felt good about his matchups with the Bulldogs, but that was before a key injury to his top player.

The loss of Shandricka Sessom for tonight’s game will create opportunities for a potential career-making moment for the Torri Lewises and Chyna Nixons of the team.

What is not an unknown is the talent and stature of Mississippi State, which has won the last seven times the Bulldogs and Rebels have met.

It begins with center Teaira McCowan. The 6-foot-7 junior is averaging over 20 points and pulling down 12 boards a game. Victoria Vivians follows with 19.4 points per game and Roshunda Johnson averages 11.9 points.

“A’ja Wilson is the best player in the league. Maybe McCowen is the second best,” Insell said. “When you look at numbers, she’s having a year that could be player of the year in the league. That says a lot for who she is. She’s a very talented player.”

The last time Ole Miss came away with a victory in the series was on Jan. 23, 2014 when the Rebels pulled out an 87-85 overtime win in Oxford.

ESPN is going to have lead-in spots to highlight the game and create national exposure for women’s basketball with an experimental tipoff of either 8:05 or 8:10 p.m. If the Rebels want to shock the world, they will have the world’s attention to do so.

“I told the team, ‘Sportscenter is going to run highlights of this game. Why not let them be of Ole Miss beating Mississippi State?’” Insell said.