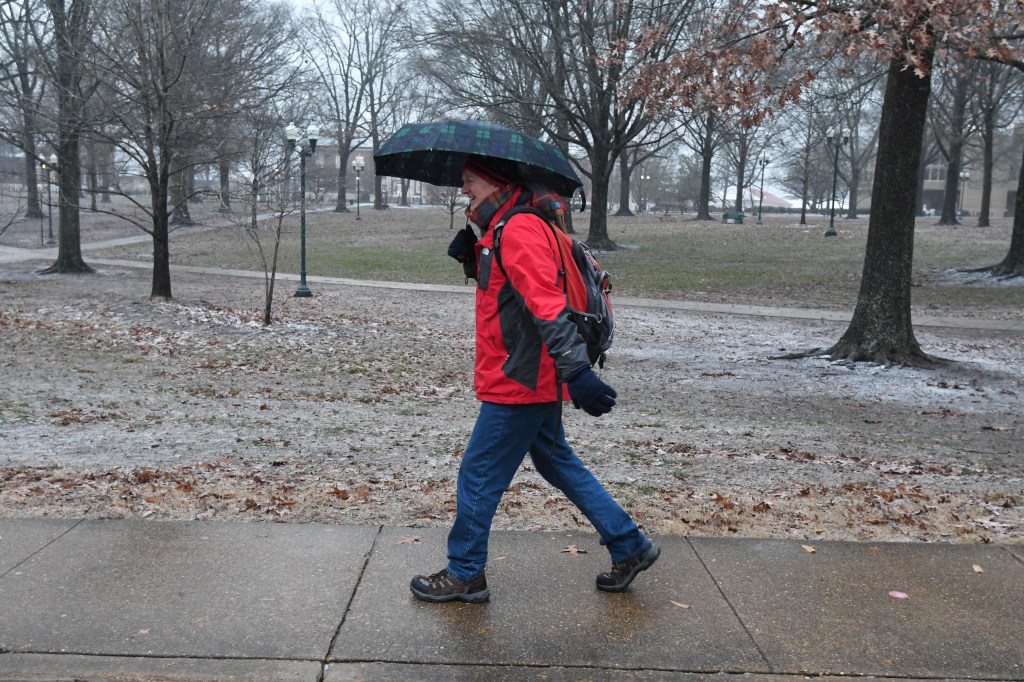 Jeff Watt walks on the Ole Miss campus as sleet and rain fall in Oxford, Miss. on Friday, January 12, 2018. Inclement weather in the area has caused both the Lafayette County School District and the Oxford School District to cancel classes today.

The first winter storm of 2018 has forced area schools to close as well as some government department to suspend services today.

The rain turned to sleet at about 6 a.m. Both Oxford and Lafayette County school districts had announced two-hour delayed openings Thursday evening; however, by 7 a.m., both districts announced schools would be closed for the day.

The University of Mississippi and Northwest Mississippi Community College have canceled classes for the day.

The city of Oxford parked its Environmental Services trucks and suspended trash and recycling pick up for Friday. Mayor Robyn Tannehill said trash service will resume on Monday.

The Oxford-University Transit system has also suspended service until the roads are deemed safe.

The Lafayette County and Oxford Public Library also announced early this morning it would be closed.

As temperatures continue to drop, roads started to ice up around 8 a.m., with both the Oxford Police Department and the Lafayette County Sheriff’s Department responding to several wrecks throughout the early morning hours.

Oxford Emergency Management Coordinator Jimmy Allgood said the bridges in the county and city were icy and roads were starting to ice over and that people should try to avoid driving for the next several hours if possible.

“As the temperatures drop tonight, we could start seeing black ice,” he said this morning. “We will have windchill temperatures in the teens. Traveling is the biggest threat right now.”

The Mississippi Department of Transportation is reporting ice on roads and bridges in multiple counties in north and central Mississippi, including Lafayette County. MDOT crews are currently working to place salt and slag on the affected roads and bridges to make them passable.

The National Weather Service issued a Winter Storm Warning for most of North Mississippi through 6 p.m. Sleet should continue through noon and then light snow is expected. Current predictions call for about an inch of snow to fall in Lafayette County.