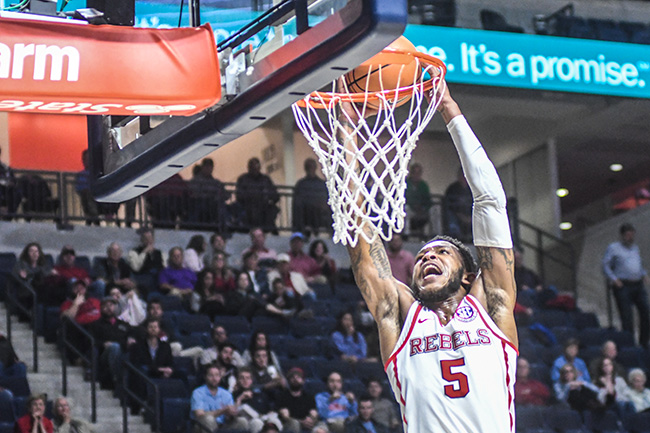 Ole Miss lost out on a golden opportunity earlier this week, but a stronger Southeastern Conference leaves the Rebels with plenty more.

The next one comes Saturday when Florida visits The Pavilion (noon, CBS) for the teams’ only regular-season matchup this season. The Gators come in at No. 34 in the NCAA’s latest RPI rankings, giving Ole Miss another chance to add a quality win to its postseason resume after Tuesday’s 85-70 loss at Auburn — a game the Rebels (9-7, 2-2 SEC) led by 10 at halftime before being doubled up in the second half.

Florida, fresh off a 71-54 win over Mississippi State, comes into the weekend a half game up on Auburn atop the SEC standings and is one of eight SEC teams predicted to be dancing come March in ESPN bracketologist Joe Lundardi’s latest NCAA Tournament bracket projections. The Gators (12-4, 4-0) also represent the fifth straight game against a top-100 RPI opponent for Ole Miss to start the SEC portion of its schedule — and a critical one with trips to Texas A&M (32 RPI) and Arkansas (25) looming next week.

Ole Miss has just two top-100 RPI wins and none against the top 50. It looked for a while the Rebels might steal their first one against Auburn on Tuesday, taking a 45-35 lead at the half and holding it for the first eight minutes of the second half. But the Rebels shot just 26 percent from the field and 53 percent from the free-throw line in the second half while giving up most of Auburn’s 50 second-half points in the final 12 minutes.

Ole Miss was without leading scorer Deandre Burnett (flu), whose status for Saturday is uncertain. Breein Tyree led the Rebels with 24 points against Auburn and is averaging 19 points over his last three games, Terence Davis had 12 points after combining for 10 in the first three SEC games and center Dominik Olejniczak recorded his first double-double with 10 points and a career-high 10 rebounds.

But the Rebels will have to put together a full 40 minutes against a Florida team averaging 82.3 points a game, third-most in the SEC.

Saturday’s game will also be the latest homecoming for Florida coach Michael White, who played at Ole Miss from 1995-99.

White, who still ranks sixth in Ole Miss history in career assists (370), is 3-0 against his alma mater at Florida. The Gators won the teams’ only meeting last season, 70-63, in Gainesville.

In his only game back in Oxford since taking over at Florida, White coached the Gators to an 80-71 win in January 2016.