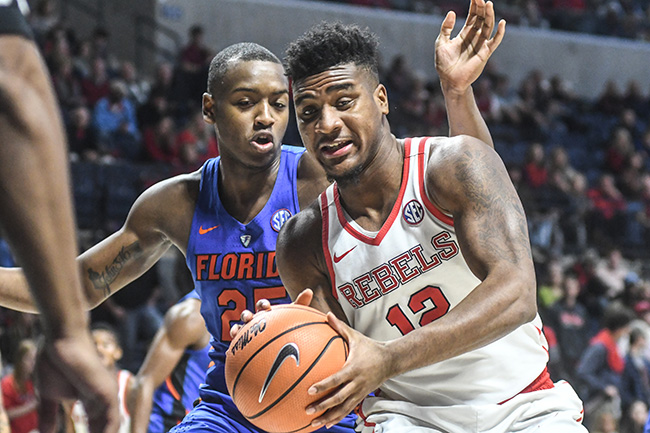 Bruce Stevens and Markel Crawford found their offensive grooves early. Deandre Burnett eventually shook off some fatigue to join them.

It was just enough for Ole Miss to pull off its best win of the season Saturday.

The trio accounted for 76 percent of Ole Miss’ points in the Rebels’ 78-72 win over Florida at The Pavilion. The win snapped Ole Miss’ three-game losing streak to the Gators, who came in atop the SEC standings as just one of two unbeaten teams in league play.

“The numbers (in the SEC) are good, so the numbers create opportunities for us,” Ole Miss coach Andy Kennedy said. “We need opportunities, and we need to take advantage of them. Today was certainly an opportunity to get a quality win, and I was pleased that we got it.”

Stevens scored a team-high 22 points and pulled down six rebounds while Burnett finished with 20 points just four days after being held out of Tuesday’s game at Auburn with the flu. Crawford added 17 points for the Rebels (10-7, 3-2 SEC), who shot 60 percent from the field in the second half despite another subpar offensive showing from Terence Davis, who finished with just eight points on 2 of 11 shooting — the fourth time in the Rebels’ first five SEC games he’s been held to single digits.

But the junior guard contributed in other ways down the stretch to help the Rebels notch their first RPI top-50 win. He chased down Keith Stone after a turnover to block a layup with Ole Miss leading by two possessions with 3:40 left. With Ole Miss clinging to a four-point lead with a minute left, Crawford drew a charge after another turnover before Davis kept a loose ball alive off Breein Tyree’s missed free throw, resulting in two more free throws for Tyree that stretched it to a 77-70 lead with 40 seconds left.

“Those are winning plays,” Kennedy said.

Ole Miss made 13 of its final 16 free throws and shot 85 percent (22 of 26) from the charity stripe for the game. Davis also pulled down eight rebounds while Marcanvis Hymon grabbed nine as the Rebels finished plus-9 (44-35) on the glass.

The Gators got a game-high 23 points from Stone and 11 points apiece from Egor Koulechov and Jalen Hudson but made just one of their final seven shots from the field. Ole Miss limited Florida (12-5, 4-1) to 37.7 percent shooting from the field and 34.5 percent (10 of 29) from 3-point range in holding the SEC’s third-highest scoring team to its second-lowest point total in league play.

“(Ole Miss) was playing with a lot of energy,” Florida coach Mike White said. “The decibel level increased in the arena. We had a few go about half(way) down for us. Just one of those days.”

Still, it was Florida that threatened to pull away after three straight baskets gave the Gators their largest lead at 52-44 with 12:53 left, but Stevens, Burnett and Crawford wouldn’t allow it. Back-to-back 3s from Crawford and Burnett, who scored 15 of his points on 4 of 4 shooting in the second half, sparked an 8-0 run that drew the Rebels even.

Stevens, who had 12 second-half points, knocked down a jumper to put Ole Miss ahead for good with 5:59 left and connected on a pair of free throws to give the Rebels their largest lead at the time at 75-70 with 4:25 remaining. Stevens, who hadn’t scored more than 12 points in any of Ole Miss’ first four league games, went 8 of 13 from the field and 5 of 6 from the free-throw line in helping the Rebels outscore Florida 32-22 in the paint.

“Just getting the ball to me on the block,” Stevens said. “Just coming out, playing hard and doing what I have to do for the team and help my team out.”

Said Kennedy, “Tonight we were able to get the ball to Bruce and he made huge plays for us.”

Ole Miss’ shooting woes from the second half at Auburn carried over to the first half against the Gators, knocking down just 30 percent of its shots in the first 20 minutes. But the Rebels leaned on Stevens (10 points, five rebounds), Crawford (eight first-half points on 4 of 6 shooting) and their defense to hang around, holding Florida to 35 percent shooting in the first half as the teams went to locker room tied at 31 before Ole Miss went blow for blow with the Gators in the final 20 minutes for its first win in the series since February 2015.

“I thought our group really grew up,” Kennedy said. “When we were down eight with about 12 play, they hit back-to-back 3s and we didn’t flinch. … To see us shoot 60 percent in the second half against a team as good defensively as Florida certainly is promising.”

Ole Miss will return to action Tuesday with a trip to Texas A&M. Tip is set for 8 p.m.