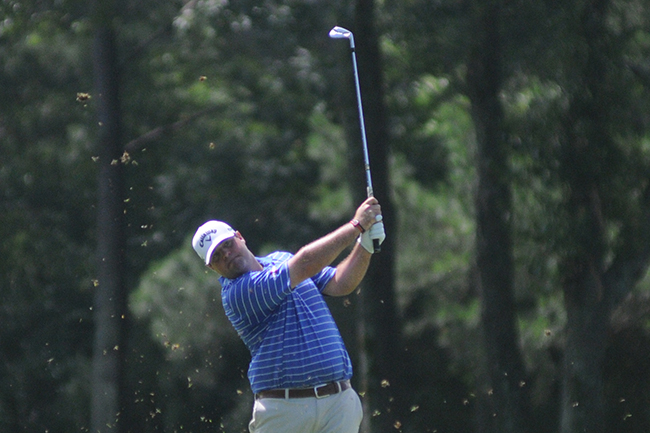 Those in Hawaii on Saturday got the scare of a lifetime. Former Ole Miss golfer Jonathan Randolph was among them.

In Honolulu over the weekend to play in the Sony Open, Randolph, now a PGA Tour pro, got the kind of blaring notification on his cell phone usually reserved for severe weather warnings or Amber Alerts. The notification, which came just after 8 a.m. local time Saturday, interrupted a FaceTime call in his hotel room with his pregnant wife, Lucy, who was back home in Oxford.

But this one was different. It was chilling.

“BALLISTIC MISSILE THREAT INBOUND TO HAWAII. SEEK IMMEDIATE SHELTER. THIS IS NOT A DRILL,” the alert read.

As he tried to comprehend the gravity of the situation, Randolph simultaneously attempted to hold it together with his wife still on the other end of the phone.

“I decided I needed to tell her what was going on,” Randolph told Mississippi Today. “She needed to know. I tried to be as calm as I possibly could. I told her that there might be a missile headed our way. I said I had better get off the phone and that I would let her know as soon as I could what the deal was.

“It was pretty tough. I’m not gonna lie. She was great. As soon as she got off the phone with me, she contacted the rest of my family.”

Randolph told the website he ran down 10 flights of stairs to the hotel basement but soon realized he didn’t want the hotel falling on him if something did happen and called his caddy, who had rented a car, to come get him so they could “try and get as far away from the city as possible.” As they drove, sirens began going off around the city.

“I saw people huddled up on street corners, sobbing, clutching their Bibles,” Randolph said. “It was awful. People were panicking. I’m not gonna lie. It was pretty awful. I was having a hard time keeping myself calm. Strangest thing, my legs were cramping, my quads and calves.”

Randolph then checked his Twitter feed on his phone where he began to see messages that the alert had been a mistake. Hawaii Gov. David Ige told CNN the erroneous warning was sent out because an employee “pushed the wrong button.”

“They said it was 38 minutes from the first warning until then,” Randolph told Mississippi Today. “Seemed like a lot longer. It felt like forever.

“I found out it’s not that easy to adjust back from all-out survival mode.”

Randolph, an All-American during his time at Ole Miss from 2007-11, went on to play in the third round of the tournament later that day and shot a 69 before shooting a tournament-low 66 on Sunday, earning a $23,560 payday. Pretty good considering the emotional circumstances.

“My first drive (Saturday), I pull-hooked dead left and hit a spectator,” Randolph said. “Luckily, he had a range finder in his pocket and it hit that instead of his hip dead-on, so he wasn’t hurt.”

The state employee responsible for the false alarm has reportedly been reassigned.

Renovations to Ole Miss’ Oxford-University Stadium on track for…