Renovations to Ole Miss’ Oxford-University Stadium on track for completion 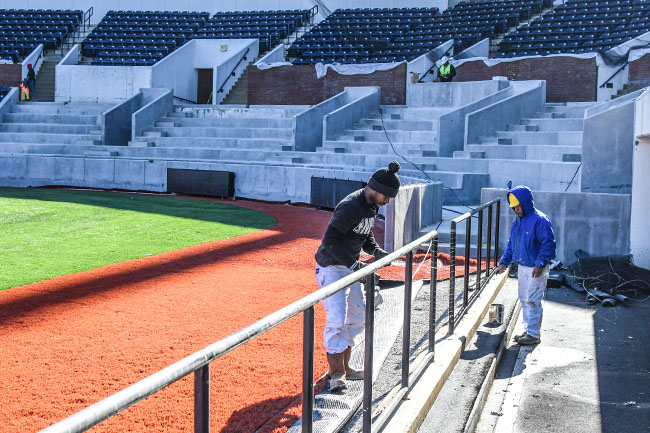 Construction workers work on the rail in front of the third base dugout at Oxford-University Stadium as work continues on the stadium, in Oxford, Miss. on Monday, January 15, 2018. (Bruce Newman/Oxford Eagle via AP)

Most of them will be done before the season. Some will be completed once it starts.

But renovations to Ole Miss’ Oxford-University Stadium are nearing the end.

The $20-million project, funded by the school’s Forward Together fundraising campaign, includes a 40,000-square foot performance center, a 3,200-square foot dugout club behind home plate and a rooftop plaza as an extension of the performance center. The dugout club will add 330 seats while the plaza will consist of more than 150 seats for season ticket holders and letterwinners, but some of the previous seating was demolished during construction, leaving the stadium’s capacity of 6,100 to grow by only a couple of hundreds seats, athletic director Ross Bjork said.

Improving the amenities for Ole Miss’ players was the focus with the performance center accounting for a bulk of the project. The center, erected on the first-base side of the stadium, includes a state-of-the-art weight room, locker room, players’ lounge, equipment room, training room and nutrition center as well as hitting and pitching tunnels. The tunnels will be completed in time for the Rebels’ season opener against Winthrop on Feb. 16 while the locker room, weight room, training room and lounge won’t be finished until April.

“From a fan standpoint, it is fantastic,” said Joe Swingle, associate athletics director for facilities and game operations, according to a release issued by the school last week. “Now what we are doing is making it for the student-athlete. From a recruiting standpoint and getting kids here, I would now put ours up against anyone in the country.”

The dugout club as well as new field turf between the grandstand and the playing field and new netting will also be ready by opening day while the plaza is expected to be completed by April. The team is set to move from the third-base dugout to the first-base dugout once the locker room is ready.

Bjork said the project has largely remained on track for completion since construction began in the summer of 2017.

“It’s a combination of renovation and expansion. With that, there’s always something,” Bjork said. “Early on, we had some initial things that were in the way that we didn’t know were in the ground. We had to dig out some utilities and dig out some plumbing pipes that were there covered up from projects in the past. You’re always going to have initial issues, but once the project got off the ground, it’s been great.”

Jackson-based CDFL Sports is the architect for the project, a familiar one for Ole Miss. The group previously worked on the recent expansion of Vaught-Hemingway Stadium and designed the Olivia and Archie Manning Athletics Performance Center.