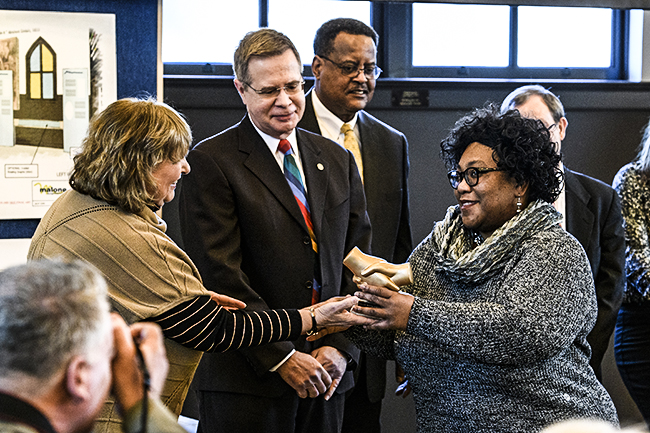 The nominees were selected based on the unique ways they volunteered in the community, and how they carry out King’s legacy through their work.

Awards were given to representatives from various parts of the Oxford community. The winners were: Kendarius McGruder of the University of Mississippi, Mason Bay of Lafayette County High School, Jack Ligon of Oxford High School and Roxanne Wright, who represented the community at large, as well as an award in memoriam for Caitlin Williams, a Lafayette County teenager who passed away in 2016.

Kendarius McGruder received his award for beginning a Summer Seminars program for young men at Oxford and Lafayette high schools. McGruder, a Sharon, Miss. native, says the award was a complete surprise, but that he didn’t start the program for recognition.

“We took high school males, and hung out with them for the day and just taught them some life lessons in hopes that they could better make decisions about what they wanted to do after high school,” McGruder said.

McGruder also says he credits his willingness to give back to the community to the skills he learned from his fraternity, Phi Beta Sigma, and that he is honored to be placed in the same arena as King.

“Becoming a Sigma gave me the framework and mindset of giving back to the community,” he said. “The fact that people have looked at some of the work that I’ve done, and decided that what I’ve done is acceptable to honor the work [King’s] done, that means a lot. I can’t do anything but be grateful.”

Another one of the winners, Roxanne Wright, was recognized for her efforts in the Oxford community as a whole. Wright is a teacher at Oxford High School, as well as a sponsor of several clubs, including the National Honor Society.

Wright says she was “blown away” when she found out she won the award, and that serving her community as an educator and outside of the workplace is the real reward.

“It’s a mark of a heart of service,” Wright said. “I’m not looking for praise. I’m just serving the community.”

After the awards ceremony, Wright says a parent’s comment made her realize just how far-reaching her influence is as a community servant.

“After I accepted the award, I had a parent come up to me and say, ‘You’re a regular fixture of conversation in our home, because of the values you’ve instilled in my son’,” she said. “Being an educator isn’t a job. It’s a service of love. When I leave to go to work every day, I’m going to my second home.”

Jack Ligon, a junior at Oxford High School, was one of two high school students honored at the MLK Day of Service. Ligon was recognized for starting Students for Alzheimer’s, an organization that raises money for research to find a cure for the disease. The club held a tennis tournament last year that raised over $5,000 for Memory Makers, a local respite day service for those with Alzheimer’s and dementia.

Ligon says the real honor lies in giving back to others who have done so much for the community.

“It was an honor to be recognized for my service with others who do so much for their community, especially under the name of someone as profound as Dr. King,” Ligon said.

After the awards ceremony, MLK Day of Service included a screening of the film “Long Walk Home,” a percentage night at Chili’s, and several community service activities throughout Lafayette County.

At press time, Mason Bay was unavailable for comment.