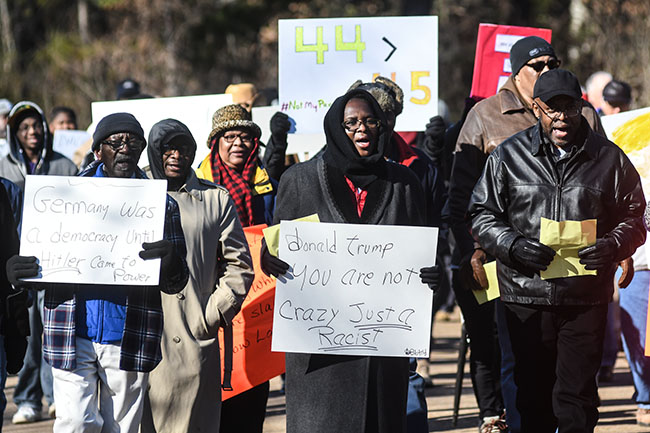 About 70 people march in protest of President Trump's recent remarks about Haiti and African countries in Abbeville, Miss. on Monday, January 15, 2018. (Bruce Newman/Oxford Eagle via AP)

A group of about 70 people – white and black, young and old – marched Monday morning in Abbeville to show solidarity against racism and recent comments made by Pres. Donald Trump.

The peaceful protest march started at 10:15 a.m. after people gathered inside the Gordon Community and Cultural Center off County Road 115.

Dale T. Gordon told the crowd before the walk that Monday’s march was one of love and not a hate march.

“We can’t change what the president said,” he said. “But we’re here to say we disagree with what he said. It is time for change and that change has to come from a higher level and the president is about as high as you get.”

Trump came under fire last week after several senators reported Trump made comments during a meeting on immigration where he insulted Haitians and made derogatory statements about African nations. Trump has denied making the comments.

Juan Dunn of Oxford said he attended the event to show support for his community and promote change; however, he admits he wasn’t shocked at the President’s choice of words.

“If I said I was surprised, I’d be fooling myself,” he said. “People can have a kingship, but that doesn’t mean they are fit to be king.”

Vincent Malone attended the march with his wife, Alice and daughter, Alacia. The sign he carried was blunt, calling Trump an “illegal president elected by Russia.”

“The president is taking things for granted,” Malone said. “He’s not being real about how he’s treating certain people in our communities.”

Some signs spread messages of love and acceptance for all people. One sign read, “God loves us all – even Donald Trump.”

Susan Fino, who is a member of the League of Women Voters and the Wisewomen: Diversity Inclusion Group, carried a sign with a simple, albeit important message, “We all need to vote, vote, vote.”

“I came out today because I feel that by engaging everyone, particularly the African American voters, is the way to have my concerns about Mississippi and our country met,” she said. “We have lots of voters here. If they’d all go out and vote in November, we would have Medicaid expanded and representatives and senators who can make us a healthier and more progressive state, and country.”

One of the march’s organizers, Janice Carr, told everyone after the 1-mile march ended, to go back home and teach their children and grandchildren about their history so it’s not allowed to be repeated.

“Trump is not the first person to and won’t be the last,” she said. “Register to vote … We need to continue the fight because Trump won’t stop. We aren’t going to accept his racist words or racist policies.”

The march was organized in just a couple of days by the Gordon Community and Cultural Center board members, with local churches and groups like Wisewomen: Diversity Inclusion, Interracial Collaboration Group and the Democratic Party helping to spread the word.

Carr said she was thankful for the number of people who attended the protest and for the sunny skies they marched under.

“It was a good mixed crowd,” she said. “And we’re thankful for it being such a beautiful day.”