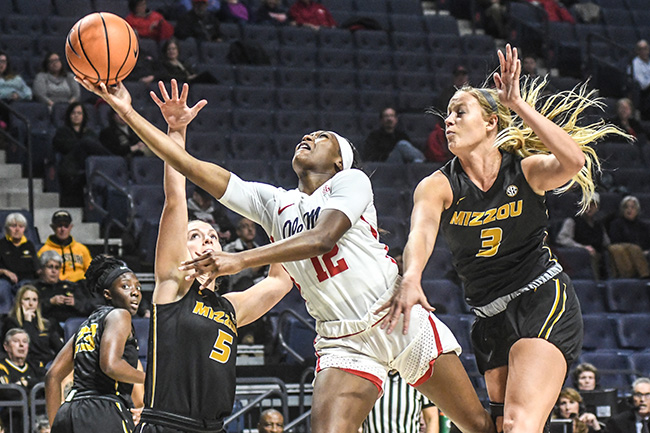 Ole Miss had a week off to prepare for Missouri, coming off their lop-sided loss at No. 3 Mississippi State. It was not enough as the No. 11 Tigers defeated the Rebels 67-48 at the Pavilion on Thursday night.

For a second straight game the Rebels (11-7, 1-4 Southeastern Conference) came out sluggish with the Tigers jumping out to a 20-2 lead in the first six minutes of the game. Missouri scored on its first eight possessions and the Rebels missed six of their first seven shots to aid in the early deficit.

Matt Insell is still winless against Missouri, joining South Carolina as the only two SEC teams the fifth-year coach has not defeated.

“I told our players, ‘you got some soul searching to do,'” Insell said. “‘You got to actually want to do this at a high level and if you don’t you got to readjust where you’re at in our program.'”

Alston played 26 minutes — her lowest minute total in SEC play — after picking up three fouls in the first six minutes of the game, causing her to sit until the second half.

Thursday also provided the seventh different starting lineup of the season with Shelby Gibson joining Taylor for the first time this year. The bigger lineup did not provide much success with Gibson scoring just five points and grabbing one rebound in 28 minutes.

The Tigers shot 12 of 27 from three-point range (44 percent) but started the game hitting five of their first six shots from beyond the arc.

“I give all the credit to the players,” Missouri coach Robin Pingeton said. “There’s some great leadership in that locker room. I really trust the voice in the locker room. They’ve worked extremely hard. I think they’re really sold out on the front of the jersey”

Ole Miss has a chance to end their current skid — dropped six of their last eight games — when they travel to Florida on Sunday (Noon, SEC Network). The Rebels only SEC win came against the Gators in a double over time win on Jan. 7.