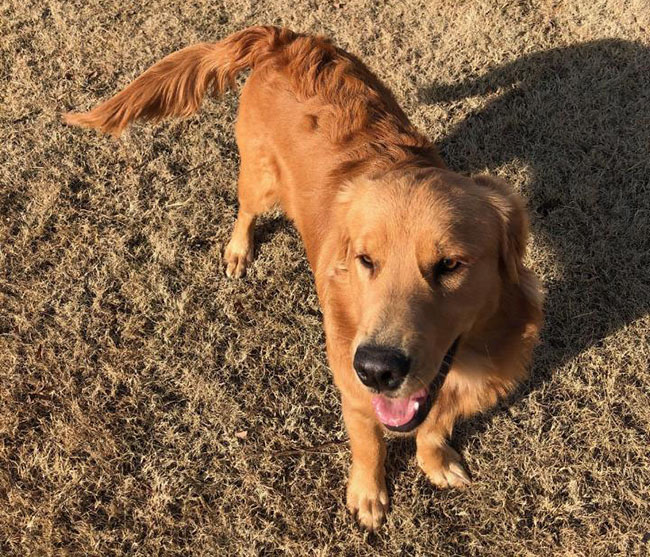 Rose, a 10-month-old golden retrieve was rescued Thursday by a Lafayette County volunteer firefighter after falling into a frozen pond.

True to her breed’s nature, Rose loves to swim in the pond behind her owner’s home.

On Thursday, the 10-month-old golden retriever’s swimming skills were put to the test after she fell through the ice-covered the pond and into freezing water.

Kenya Wolff was inside helping her 15-year-old daughter, Grace with some homework when her son, Ethan, 11, came running in the house yelling that Rose was stuck in the pond, surrounded by ice.

“The pond had been frozen over and I guess Rose was curious and walked out on it,” Wolff said Friday. “My son didn’t see her fall in but he heard her yelping. She was in the middle of the pond treading water, but there was ice all around her.”

With her husband, Walter Hamilton, gone for the day, Wolff ran over to a neighbor’s house.

“She was in there about 20 minutes when we finally decided to call 911,” Wolff said. “I wasn’t even sure they responded to this type of thing. They didn’t even hesitate.”

Rose was getting tired and was struggling to stay afloat when volunteers with the Lafayette County Fire Department started to arrive at Wolff’s home on County Road 313. One of the firemen even brought a fishing boat in case it was needed.

Firefighter Jayson Gazaway, who works out of Station No. 9 in Taylor, put on a pair of waders, grabbed a long metal pole with a hook on the end and started to walk into the pond toward Rose. A rope was tied around his waist that was held tightly by a fellow firefighter, Andy Kenton.

Gazaway was able to break up the ice around Rose enough that she could swim to the edge.

“Rose was scared at first so my kids and I got behind the fireman and started calling to her,” Wolff said. “Eventually, she swam toward us.”

Wolff estimated Ross was in the water for at least 40 minutes.

After taking the dog back into the house, they gave her a warm bath and wrapped her in blankets.

Wolff lent Gazaway some of her husband’s clothes to change into after the rescue and hopes to soon be able to thank him again.

“I didn’t even ask his name,” she said. “It was just hectic and the firefighters were so professional about everything.”

Wolff said if it wasn’t for her son finding Rose and the firefighters’ brave actions, things could have turned out very different for their family pet.

Gazaway has been a volunteer firefighter with Lafayette County for about five or six years. He says he just acted on instinct on Thursday. It was the first time since becoming a firefighter he’s jumped into the below-freezing water to rescue a dog.

“If I had to it all over again, I would,” he said. “Being a firefighter is something I’ve always wanted to do. My dad was one while I was growing up and seeing him helping people made me want to do the same thing.”