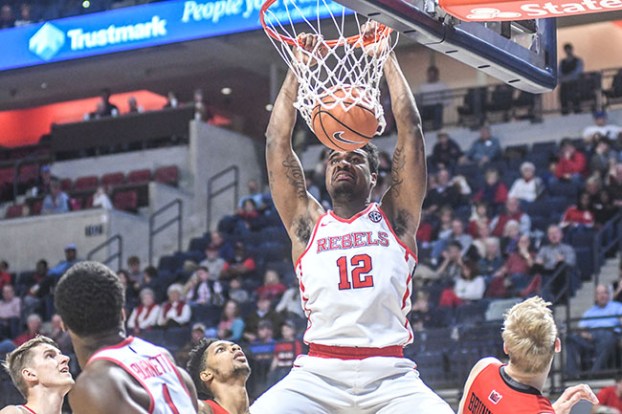 Andy Kennedy’s teams have been synonymous over the years with perimeter scoring, but Ole Miss has changed its offensive focus of late.

Bruce Stevens has a lot to do with that.

Guards Deandre Burnett (14.3 points per game) and Terence Davis (14) are still the Rebels’ leading scorers, but Stevens has taken some of the pressure off with his emergence on the interior. Stevens is next at 10.6 points a game with that average spiking with four straight games in double figures.

“Really for about the last 10 days to two weeks, our emphasis has been on trying to get the ball to the paint,” Ole Miss coach Andy Kennedy said.

Stevens led Ole Miss with 22 points in the Rebels’ win over Florida last weekend and followed it up with a 20-point outing in Ole Miss’ 71-69 loss at Texas A&M on Tuesday against the Aggies’ formidable frontline duo of center Tyler Davis (6-11) and Robert Williams (6-9). Banging with bigger bodies inside isn’t a role Kennedy primarily envisioned for the 6-foot-8 Stevens when he signed him out of Jones County Junior College in the spring, but it’s one Stevens has taken in stride.

A junior college All-American last season, Stevens averaged 16.1 points and 11.5 rebounds for JCJC while shooting 38 percent from 3-point range, a prime candidate to stretch defenses with his touch from deep and thus give more space for fellow newcomer Dominik Olejniczak to operate down low. But Olejniczak’s offensive game — the 7-footer is averaging just 4.1 points — has been slow to come around in his first season in the SEC after transferring from Drake, and Kennedy needed more production from the frontcourt.

“I was comfortable with (playing in the post) at my other school,” Stevens said. “I just came here to do what I’ve got to do. I’ve got to make more shots so I can stretch the floor out. But it ain’t no problem for me.”

Stevens came off the bench for the Rebels’ first seven games but has started eight of the last 12, including five straight. He had just two made 3-pointers all season until matching that total against Auburn on Jan. 9.

But most of Stevens’ points have come from close range as Ole Miss’ only consistent offensive presence down low. Using his 255-pound frame to create space and overcome his lack of ideal height on the block, Stevens is shooting 58 percent from the field since being put back in the starting lineup with less than a third of his shots coming from beyond the arc.

“When I wasn’t confident, I was just shooting the ball just to be shooting,” Stevens said. “Now I’m getting my confidence back and believing in my teammates.”

His teammates are believing in him, too.

“A lot of times, if you beat your man, the other big (on defense) is hesitant to come over (and help) because Bruce is creating space down there and finishing everything in the paint,” Burnett said. “If you get to the rim, a lot of times he’s either going to be hesitant to come and allow us to finish or if he does come, we’re confident in Bruce to finish that play when we dump it down to him.”

What’s kept Stevens off the floor at times is defense that still has to catch up with his offense, something Kennedy said has to do with conditioning as much as anything. But that’s improved to the point that Stevens played a season-high 33 minutes against Texas A&M and finished 9 of 15 from the floor. He logged 26 minutes against Arkansas on Saturday, going 5 of 9 from the field, before fouling out late.

“A lot of it is just him understanding the level at which he has to compete day in and day out, even in practice, to get his conditioning to where it needs to be,” Kennedy said. “Him understanding you can’t take plays off at this level offensively or defensively, and I think he’s starting to understand that.”

Stevens is gaining the trust of his coach and teammates alike with each passing game as he goes through the natural maturation process that comes with playing for the first time at college basketball’s highest level.

“We felt like he could score close to the basket because he’s pretty nimble and he has an offensive repertoire which allows him to get to the basket, especially if he can put his body on you,” Kennedy said. “He’s our best low-post presence, and we’re trying to run offense through him on the block.”

For the first time in a long time, Terence Davis found the hot hand. But Arkansas was en fuego. Davis... read more