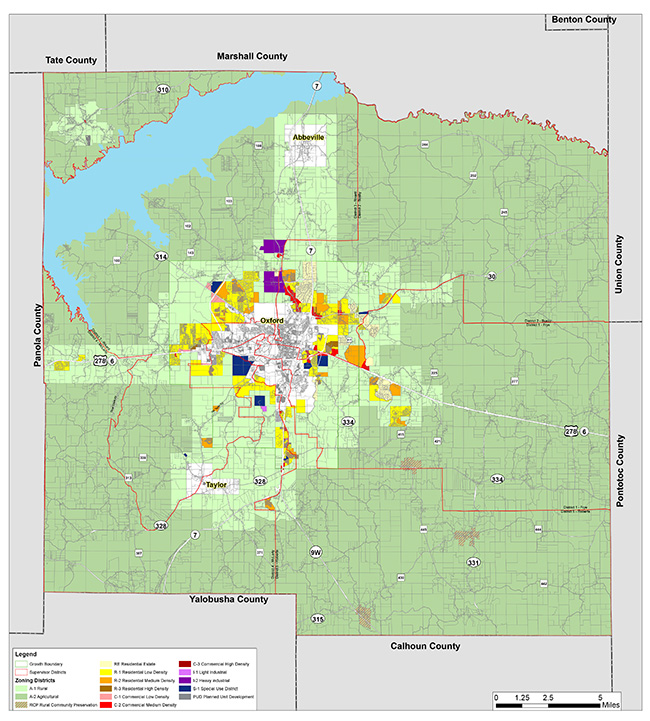 OXFORD, Miss. – With the zoning ordinance now in effect for Lafayette County and the possible annexation of 12 square miles around Oxford looming, some residents have raised concerns about potential conflicts.

If the annexation passes, the affected properties with the proposed boundary line will eventually fall under the city of Oxford Land Development Code as opposed to the Lafayette County zoning ordinance.

At Thursday’s Lafayette County Board of Supervisors meeting, a few citizens expressed concern about their properties and annexation, including Ricky Harwell Jr., whose property was originally listed as commercial, but is marked as residential in the final zoning map.

“I bought the property under the circumstance that I was going to be able to put a commercial building on it,” Harwell said. “It just makes no sense to me that it’s changed and now I can’t put a commercial (building) on it, but if the city takes over in six months all of a sudden I can do it. It caught me off guard.”

County Attorney David O’Donnell said there will be a lengthy transition process should the city decide to annex.

“When the city annexes property, there will be a transition period where the city will be enforcing two zoning ordinances, or as they refer to theirs, the Land Development Code,” O’Donnell said. “The thing I want to make clear is, the day it’s annexed does not immediately change the zoning. It will take time to do that.”

Planner Mike Slaughter, of Slaughter & Associates, says the plans to annex could pass in as soon as six months, if there are no objections. He added that the reason the city is looking to annex in the first place is largely due to growth and that some form of annexation is inevitable.

“The city of Oxford has very little vacant land to grow into, so they’re looking to expand in those areas that are adjacent to the city,” Slaughter said. “Basically, there are very few vacant land resources and room to accommodate growth, residentially as well as commercially. Even their comprehensive plan and Future Land Use map reaches beyond the corporate limits.”

Should the city decide to annex the proposed 12 square miles of land, the city limits of Oxford would almost double in size.

Slaughter said that the areas in the annex are already in need of more development, and expanding city limits will give people access to city utilities.

The areas under consideration for annexation border existing city boundaries include West Oxford Loop extended in the northwest corner, portions of Old Sardis Road leading to and including FNC Park and Lakeway Gardens. The northeast area is set to include Highway 30 and part of County Road 101, or old Highway 7 north. The east boundary is set to include portions of Highway 6 where the new Lafayette County Justice Center is being built, the Lafayette County School District campus and Brittany Woods. In the southern portion of Oxford, the study area will take in Southpointe and Twin Gates, along Highway 7. Another area off Highway 6 would take in Thacker Heights and Royal Oaks.

The first reading of the official ordinance for the intent to annex will be at the Board of Aldermen meeting on Feb. 6. A second reading and public hearing will take place on Feb. 20, with a possible vote during the aldermen’s first meeting in March.

Should the ordinance pass, a Lafayette County chancery judge will rule on whether the annexation is reasonable.